Read on for a detailed account of our sixteenth day on the Annapurna Circuit. Today, we trekked from Ghorepani to Ghandruk covering a total distance of around 14.4 km in around 7 hours. We also started the day by climbing up to the Poon Hill lookout to watch the incredible sunrise. This was the penultimate day of our Annapurna Circuit Trek.

Our sixteenth day walking the Annapurna Circuit was also our penultimate day tackling this incredible trek and we started it with a magical sunrise at Poon Hill. Our route would take us from Ghorepani to Poon Hill to watch the sunrise, from Ghorepani to Ban Thanti, from Ban Thanti to Tadapani and from Tadapani to Ghandruk. Starting at 2880m, we would ascend to 3200m for Poon Hill but ultimately descend to 1940m by the end of the day. It’s around 14.4 km and 7 hours walk from Ghorepani to Ghandruk including all stops. It’s around 17.5km and 8 hours+ if you decide to head up to Poon Hill at the start of the day.

Read on for my experiences, tips and advice from day sixteen hiking the Annapurna Circuit Trek.

Day Sixteen: Ghorepani to Ghandruk (via Poon Hill) on the Annapurna Circuit

Distance: Ghorepani to Ghandruk only 14.4 km, Including Poon Hill 17.5km

Our penultimate day on the Annapurna Circuit started before 4 am (too early even by my standards) but was one of the most memorable of the trek. There are a few decisions to make today. Tackling Poon Hill is a must and is best done at sunrise. Afterwards, it’s possible to continue to Ghandruk like we have done, extending your trek or heading down to finish the Annapurna Circuit today. It’s a long but largely downhill 19km slog to Nayapul where you can catch buses direct to Pokhara. While it was tempting to end the day in a warm, comfortable bed in a city, we persevered and delayed our return to civilisation by another day.

We dragged ourselves out of bed just before 4am and got ready for our Poon Hill hike. We arranged to meet the girls at 4 but we were late and didn’t see anyone at the meeting point. Armed with our head torches, we decided to head straight for Poon Hill. The whole hike up is supposed to take between 45 mins to an hour but we managed to get up in just 25 minutes, flying up the steps and passing other early risers.

We arrived at the top to find the girls the only ones at the huge watching tower erected for tourists to enjoy the sunrise. Sunrise was still a while away and we spent the next hour just enjoying the stupendous views of the snow-covered peaks. Annapurna I (8091m), Annapurna South (7219m) and Macchapucchre (6993m) looked close enough to touch, their silhouettes majestically jutting out of the darkness. As the sun slowly crept up, its rays began to slowly illuminate the scene. The only downside to these magical moments were the crowds that started arriving just before sunrise. Poon Hill gets very busy and the viewing tower soon filled up with people. Be prepared to be elbowed out of the way, just like we were, if you have a prime viewing position!

After spending a while longer at Poon Hill, we headed back down to our hotel. We packed and had breakfast before starting our penultimate day of trekking. Our group increased by two as we managed to persuade the girls to join us for the last two days of the trek.

We set off towards Ghandruk and joined the throngs of people climbing steps out of Ghorepani. It reminded us of those endless stairs from yesterday but luckily it wasn’t anywhere as long.

We reached the top and spent some time at our second viewpoint of the morning. There were loads of people there and we were keen to not get stuck behind them for the rest of the day. The path now descended into a forest with lush vegetation, waterfalls and caves. This had a very different feel to where we were just a while ago.

We passed through the village of Ban Thanti but didn’t stop. The trail now led through another forest, overlooking tree-covered mountains around us. At one point we spotted a group of monkeys in the trees and observed them for a while. After descending deep into a ravine, we had to negotiate a tough section of more stairs. The humidity wasn’t helping as we longed for a lunch break. At this point a dog that we spotted in the jungle followed us all the way to the next village. After arriving at Tadapani, we stopped for lunch and played with the local dogs for a while. 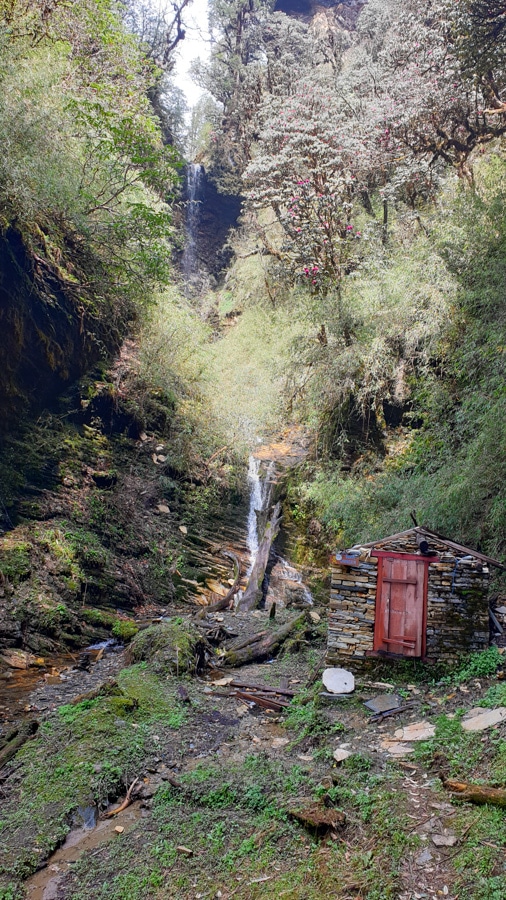 Out of Tadapani, the path heads mostly downhill. The trail snaked deeper into the forest and led us over streams and rocks littered around the area. We were making quick progress but could also see dark clouds gathering, a sure sign that rain was on the way.

Starting hearing thunder, we tried to pick up the pace and get to Ghandruk as quickly as possible. Martin’s leg gave way and he fell, injuring himself in the process. I grabbed his bag to lighten his load and continued down a series of stone steps towards the village as the sky continued to rumble.

Eventually, we reached the town and climbed up towards our guesthouse, exhausted and hungry. We had good luck again that day – about 30 minutes after arriving, the skies opened up and an epic rainstorm unleashed itself all around us. We showered and watched the downpour for a while, the sound of rain being one of my favourite things. Preferably when I am not caught in it!

The guesthouse seemed new, with colourful doorways, nice bathrooms and a modern dining room. We were also the only people staying here tonight so had the whole place to ourselves. We relaxed with our usual pots of black tea, masala chai and plenty of food. It was our last night on the Annapurna Circuit and we had a great evening recapping our experiences, chatting and playing cards. We had a few beers to celebrate our achievements. It was quite a late night by the trek’s standards but it was a great way to spend our last full day on the trail.

The guesthouse seemed new, with colourful doorways, nice bathrooms and a modern dining room. It’s located above the rest of the village and – as advertised – provides some excellent views. There is a spacious terrace for relaxing outside and you can have breakfast there if the weather is good. One of the nicest places we’ve stayed at!

Up Next: Ghandruk to Nayapul and Pokhara

Ghasa to Tatopani on the Annapurna Circuit – Day Fourteen

Tatopani to Ghorepani on the Annapurna Circuit – Day Fifteen