Read on for a detailed account of our eighth day on the Annapurna Circuit. Today, we trekked from Manang to Yak Kharka, covering a distance of 10.8 km in around 3 hours 45 mins. It was the first “road-free” day of the trek with no motor vehicles allowed after Manang. The views were some of the most spectacular of the entire trek!

Our eighth day walking the Annapurna Circuit was was one of the shortest but also very unique. It was the first day that we didn’t encounter any vehicles on the trail. This, coupled with some stunning mountain views, makes it another satisfying day on the circuit. Today’s route would take us from Manang to Ghunsang and from Ghunsang to Yak Kharka. Starting at 3540m, we would ascend to 4100m by the end of the day. We also did a short acclimatisation walk to Ledar which lies at 4200m.  It’s around 10.8 km and 3 hours 45 mins walk from Manang to Yak Kharka including all stops.

Read on for my experiences, tips and advice from day eight hiking the Annapurna Circuit Trek. 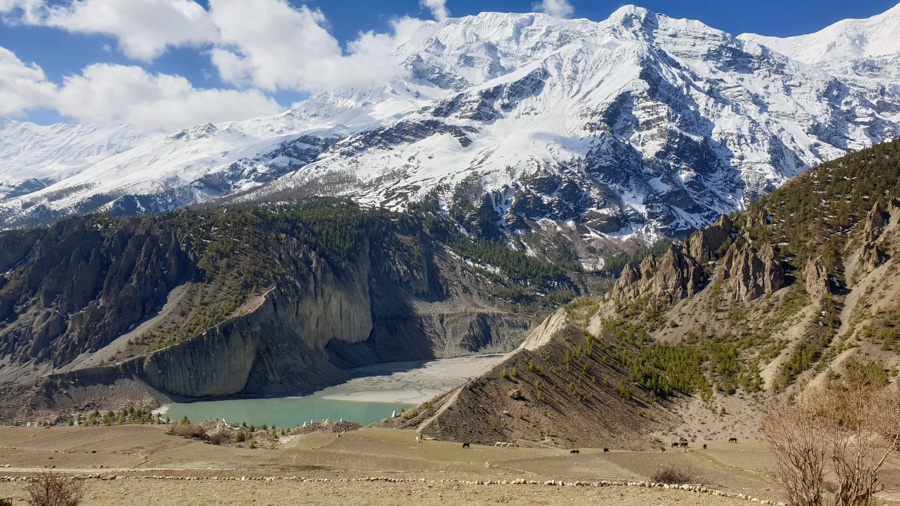 Day Eight: Manang to Yak Kharka on the Annapurna Circuit

This section of the Annapurna Circuit marked the first day where we didn’t encounter any cars or buses. Motor vehicles are prohibited from here on in all the way to Mukhtinath. Road construction has had a significant impact on the Annapurna Circuit with the majority of the trail now connected by road. While this has made it more accessible and provided infrastructure which has benefited local communities, many consider road construction to be endangering Annapurna Circuit as we know it. However, the Nepalese government and the Annapurna Conservation Area Project have been working hard to offset the road’s impact by introducing alternative trails, called New Annapurna Trekking Trails (NATT) which get trekkers away from the road. I have described some of these alternative routes in previous posts (signposted with either with blue/white or red/white markers) but you may even find some that we didn’t spot!

While it is a bit disappointing that as it stands there are essentially only three days of the trek truly “road-free”, this shouldn’t put you off doing the Annapurna Circuit. We rarely saw vehicles on the east side of the circuit and never really felt bothered by them. The west side is a slightly different story, but more on that later.

After a rest day that was anything but, it was time to hit the trail again! Today isn’t a super tough day but most of the elevation gain comes in the first half of the walk. We started with another trip to the bakery for some coffee and fresh croissants. After finally tearing ourselves away from the café, we made our way to the checkpoint to get out permits checked and stamped. The path weaved out of Manang and we quickly climbed above the town. We took time to enjoy great views of the mountains, river meandering through the valley and a small lake in the distance. Hearing a commotion, we stopped and watched as a herd of goats stampeded its way across our path towards their pastures. Definitely the kinda traffic jam we didn’t mind stopping for!

The sun was shining and it was another beautiful day out on the trail. As if you weren’t already, today is a great day for enjoying the views – the scenery is incredible as the trail heads higher and higher. We walked past yaks grazing on green slopes who glanced at us indifferently before continuing to eat. Then, just as Manang was just about to disappear from view, we came across a sign informing us that this was the point beyond which motor vehicles were not allowed.

From here on in it was just us and the mountains. The only traffic we experienced were mule trains laden with goods and mountain yaks grazing to the side of the path. The first half of the day’s walk, to Ghunsang, is the most challenging with around 400 metres of elevation gain. Once in Ghunsang, there is a café with some rooftop seats for enjoying the views. It’s a good chance for a bathroom break and to refill water bottles.

The trail continues to weave its way up with spectacular views of snow-capped peaks in the distance. After Ghunsang it levels out and while there are usual ups and downs, it’s a fairly easy walk all the way to Yak Kharka. The path is pretty narrow in places so take care when passing/being passed and give way to mules and yaks. We took time to enjoy the scenery and watched eagles soar majestically through the blue sky above us.

There are a couple of suspension bridges to negotiate on this stretch of the hike. As usual, these are single file affairs and if you don’t have a head for heights, try not to look down! The mountain views along this section are some of the best of the whole Annapurna Circuit. There are no cars, roads or villages to break up the view so the focus is firmly on the stunning nature all around you.

Eventually we reached Yak Kharka where many people choose to spend the night to avoid exceeding the recommended 500m elevation per day gain. Some do continue to Ledar, which is just 100 or so metres higher. It’s really down to personal preference and whether you continue to Thorong Phedi or High Camp the following day.

Our guesthouse was actually a little higher than most other guesthouses, at the edge of the village. We had a long leisurely lunch and dropped our bags in the room before doing our now-customary acclimatisation walk. 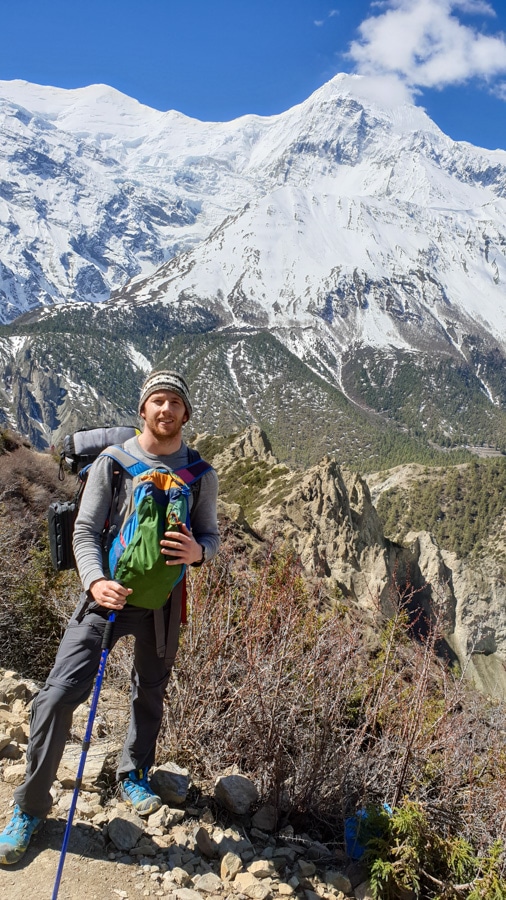 As we stayed at the edge of Yak Kharka, we simply headed straight out of the village and headed to Ledar. It was still early afternoon so we took our time strolling along with just our water bottles. There is another long suspension bridge to cross and Ledar lies immediately on the other side. We stopped by the guesthouse and managed to lose one of the guys who continued power walking past Ledar and into the hills above the village. After hanging out around for a bit, we made our way back towards Yak Kharka.

Located a little higher than the rest of Yak Kharka, it’s on the way to Ledar. It has an extensive food menu but only bucket showers. I wouldn’t recommend using them but if you must shower, try and do it as early in the day as possible as it can get VERY cold here at night – even in warmer seasons.

We had one of the most social nights of our stay with our fellow hikers from all over the world. It was a super fun night spent playing cards, drinking tea, eating and keeping warm by the oven in the spacious common area. Unsurprisingly, this was one of the coldest nights of the entire trek. Yet I somehow managed to avoid using my sleeping bag, making do with the toasty blanket that you get at most guesthouses along the route.

Up Next: Yak Kharka to Thorong Phedi – Day 9

Lower Pisang to Manang on the Annapurna CIrcuit – Day Six