Read on for a detailed account of our fifteenth day on the Annapurna Circuit. Today, we trekked from Tatopani to Ghorepani covering a total distance of around 15.65 km in around 8.25 hours. This was one of the toughest days of the entire Annapurna Circuit with 1700m elevation gain which took us up to Ghorepani which lies at almost 3000m.

Our fifteenth day walking the Annapurna Circuit was an unexpectedly difficult one with a monster elevation gain and a steady but long climb back up to higher altitudes. Our route would take us from Tatopani to Ghara, from Ghara to Shikha and from Shikha to Ghorepani. Starting at 1190m, we would ascend to 2880m by the end of the day. It’s around 15.65 km and 8.25 hours walk from Tatopani to Ghorepani including all stops.

Read on for my experiences, tips and advice from day fifteen hiking the Annapurna Circuit Trek.

Day Fifteen: Tatopani to Ghorepani on the Annapurna Circuit

Just three days away from the end of the trek, the Annapurna Circuit throws up an absolute curveball! Today was one of the longest and toughest days of the trek. And just a day after descending 1000 metres, we would climb almost 1700m by the time we arrived in Ghorepani. Yep, that’s by far the biggest elevation gain of the whole trek!

We set off out of Tatopani and went through a checkpoint. It’s the usual process and doesn’t take too long. After crossing the river, there is an option to follow the dirt road up or take a more direct route through the forested area. Erik and I decided on the latter while Martin and our guide, Dipak, headed up the less steep road.

We headed up past small farmhouses, trying not to step on goats lounging in the morning sun. Locals tended to crops in their terraced fields and waved as we walked by. The path continued relentlessly up with as we climbed stone steps in the morning heat. It was barely 9 am but we were already covered in sweat. There is no signage along this route but as long as you just follow the steps up, you’ll eventually rejoin the road at the top.  Eventually, we emerged at the top and took a break. Forests and terraced fields stretched as far as the eye could see.

After resting and waiting for our companions to catch up, we left the road and continued on a well-marked trail. There is some road walking interspersed with following the trail over the next few kilometres but the landscape more than makes up for it. The views of the surrounding mountains, pockmarked with houses clinging to the slopes, were spectacular. We passed through bustling villages, the bigger of which – Ghara – is a good place to stop for a quick break if need be. We decided to push on as it was way too early for lunch.

We left the road again and continued on, pausing for water breaks and taking in the amazing scenery around us. The nature of the first half of today’s route means that it’s possible to look back and see where you just came from as the valley opens up below you. Don’t forget to gaze up at the snow-covered peaks in the distance.

As we left Tatopani, we knew that we had a long, tough day ahead of us. A 1700m elevation gain is not something to sneer at, especially as the last time we gained ANY sustained elevation was the day we crossed Thorong La Pass! Despite the tough climb earlier, we didn’t feel that we’ve gained that much today. This made us realise that we had some major uphill sections coming up but Dipak would just laugh and tell us that it wouldn’t be too difficult.

We reached Shikha which is one of the bigger settlements on today’s trail and stopped at another checkpoint. We were pretty hungry by that point so bought a couple of packets of coconut cookies and finished them in minutes. After continuing on, just as the path started climbing out of Shikha and getting a bit more challenging, it was time to stop for lunch. This definitely turned out to be a strategic decision on our guide’s part. The second half of the day is one of the toughest of the whole trek.

We stopped at Hotel Serendipity just outside Shikha for a nice long lunch. It’s a pretty guesthouse and we were kept amused by a cow that kept trying to get into the grounds to graze while the owner’s young son continuously failed to shoo it away. Shikha makes for a perfect place for a lunch stop. Make the most of it as the real work starts here. After Shikha, the trail heads almost exclusively up. The next few hours basically consist of nothing but stairs.

The rest of the day consisted of heading up a long section of steps and pausing for drink breaks. Rinse, repeat. Every time we thought we are close to the end, we would round a corner to be faced with yet another set of steps disappearing into the distance. We didn’t let this bring us down, however. We were in a great mood – telling stories, singing songs and joking around – but we may have just been delirious from the countless stairs.

After a long, hard slog, the trail eventually reaches a gate welcoming trekkers to Ghorepani Poon Hill. This turned out to be a cruel deception as we had to climb yet another lengthy stair section to get to Ghorepani proper and collapse on the beds of our guesthouse.

Ghorepani is one of the busiest villages along the entire Annapurna Circuit. It serves as a hub for hikers tackling the Ghorepani Poon Hill Trek, a shorter and more accessible route that serves as a gentler introduction to the Annapurna Conservation Area as well as those who just want to see the sunrise at Poon Hill. This does mean that it’s by far the busiest village we’ve seen pretty much anywhere on the circuit, with tour groups taking over our guesthouse.

Soon after we arrived, rain started thundering down on the tin roof of the restaurant area we were relaxing in. We spent the evening in the usual manner. Two girls that we met earlier on the trek came by our guesthouse and convinced us to join them for an early hike to Poon Hill to watch the sunrise. This did mean waking up at 3:45am, which we weren’t thrilled about, but it proved to be worth it. 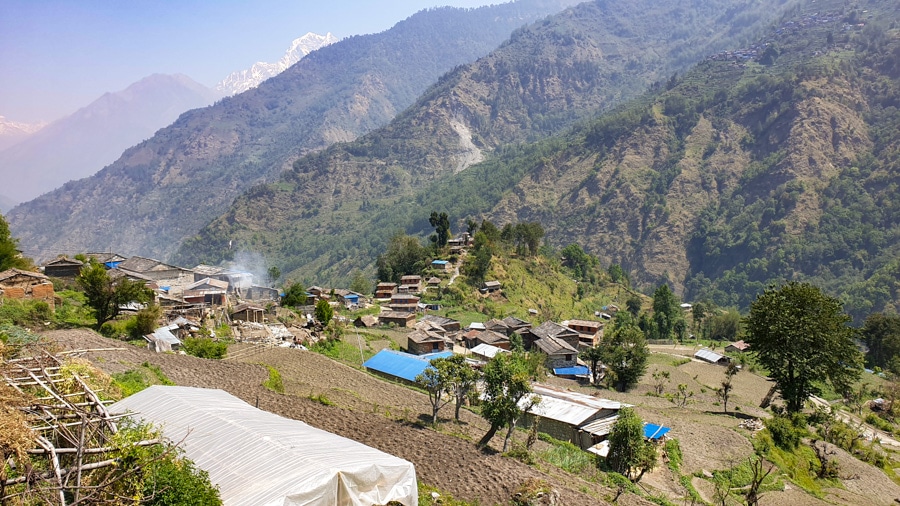 Staying in Ghorepani: The Sunny Hotel

A big and rather ugly building overlooking a basketball court. The rooms were tiny but the beds quite comfortable. The food is ok. The place was very busy and it feels like somewhere that gets booked up by tour agencies rather than relying on solo trekkers. Avoid if you are after something more authentic.

Up Next: Ghorepani – Poon Hill – Ghandruk

Ghasa to Tatopani on the Annapurna Circuit – Day Fourteen