Read on for a detailed account of our first day on the Annapurna Circuit. Find useful information on getting to the start of the trek including booking buses and travelling from Pokhara and Kathmandu to Besisahar. Then read about the first section of the trek between Besisahar and Bhulbhule.

After a few days exploring Kathmandu and the surrounding areas, it was time to go trekking. This was the reason I travelled to Nepal in the first place and we were about to embark on a 17 day itinerary to trek the entire Annapurna Circuit. The first stage of our epic journey would take us from Kathmandu to Besisahar on a long and bumpy bus ride. After making our final preparations, we would continue from Besisahar to Bhulbhule on foot.

The bus journey from Kathmandu is around seven hours and about four to five hours if starting from Pokhara. It’s a 9km and around 1.5 hours walk from Besisahar to Bhulbhule. Read on for my experiences, tips and advice from day one hiking the Annapurna Circuit Trek. 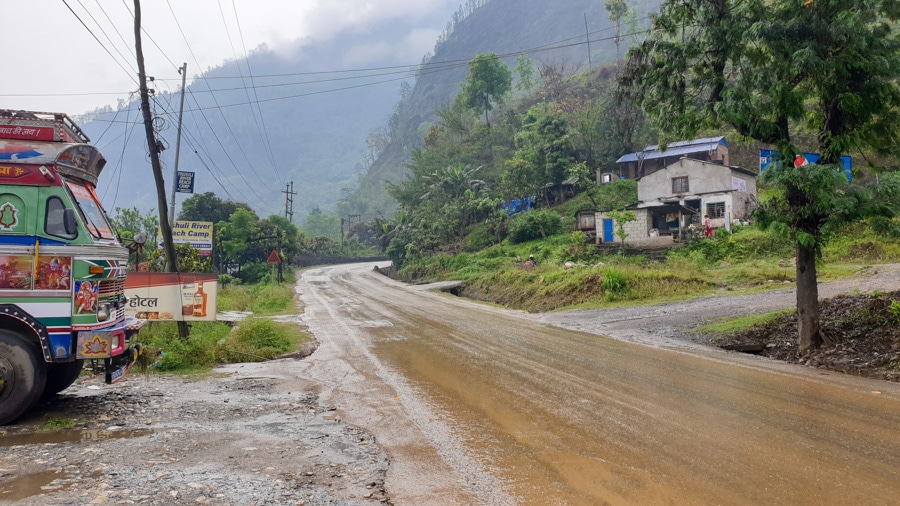 Day One: Starting the Annapurna Circuit – Kathmandu to Besisahar to Bhulbhule

It was an early start as we climbed out of our beds at around 4 am and got ready to head to the bus station. There are daily bus departures from Kathmandu to Besisahar, the starting point of the Annapurna Circuit. If you’ve ever been to Kathmandu, you’ll know that it has a bunch of different bus stations. This morning we started our 2.5km walk to Gongabu Bus Park, a station around 2.5km north of Thamel (30-45 mins walk). We decided to save money on the taxi and took somewhat of a “scenic” route. We walked along the muddy road running parallel to the Bishnumati River. There were small shacks set up alongside the road and this was one of the poorest areas of the city we have come across.

Eventually, we reached the bus station and climbed through a hole in the fence to reach the terminal. We already had our tickets, which we purchased the day before. We were told to be at the bus station and wait for our guide who would meet us there with our tickets and take us to our bus. After a while, Dipak arrived and led us on a short walk to the Ring Road where the buses to Besisahar are often parked. This is something to bear in mind if you are buying tickets from the station on the day. Someone will usually point you in the right direction.

English isn’t widely spoken and the place can be a little overwhelming so consider using a tour company to book your tickets. All of our travel arrangements were handled by Adventure Metro Everest Travel and Treks Ltd, a company I can personally vouch for (it belongs to a friend of a friend of a friend but they were fantastic).

The tickets didn’t have seat numbers but luckily we managed to grab seats at the front of the bus. I’ve been on buses in Nepal that gave you a guaranteed seat and others where we were almost hanging on to the side of the bus. I think it largely depends on the route and the company running it. We were one of the first people to get on but soon the bus was filling up with people we picked up on the way. The conductor – every bus in Nepal has one – drums up business by waving and shouting at people outside and beckoning them to get on. To this day, I have no idea how people know where the buses are going as many don’t seem to have any numbers or signs. It’s chaos but it all somehow works. The conductor has a system of communicating with driver using whistles and bangs to let him know whether to stop or go. It’s all very fascinating to watch for a while. Oh and all this happens with the conductor hanging out of the open door. Bus doors in Nepal very rarely close.

I’m not going to lie – the “tourist bus” is not the most exciting or comfortable experience in Nepal. Yet, there is not much else you can do so just sit back, grip that chicken tight and try and get some sleep!

Buses depart from Pokhara’s Tourist Bus Park a couple of times a day. Again, check for the latest schedules. There are many tour agencies in Pokhara that sell bus tickets and from my experience, they tend to all be priced very similarly (I checked with a few agencies who all gave me the same price).

The journey time is around 4-5 hours. Alternatively, there are more frequent buses to Dumre from where you can catch a local bus or a jeep to Besi Sahar.

We finally arrived in Besisahar around 1pm and stretched our legs. Besisahar is a busy (and quite dusty) village and is the biggest settlement until Manang so it’s sensible to make any final preparations for the Annapurna Circuit here.

We had a leisurely lunch of chicken noodles and prepared everything for the first section of our trek. Our guide made sure that our TIMS card was checked and after paying, we finally got ready to set off on the Annapurna Circuit!

Many trekkers choose to skip this first section of the trail and get a local bus or a jeep further up the trail. It’s possible to negotiate with the bus driver to take you to Bhulbhule or even to Ngadi. We, however, have always planned to trek the entire Annapurna Circuit and so set off along the path straight out of Besisahar.

This first section of the trek is along the road that goes as far as Manang. It’s wide and easy to follow without any major elevation changes which makes it an easy introduction to the trek. There was hardly any traffic and only a few jeeps and buses passed us during the 9km walk to Bhulbhule. The road runs along a river and there are some nice views of the valley and the surrounding mountains. Small villages pockmarked the slopes and we walked past homes and small restaurants. We also got a glimpse of the water rushing past huge boulders in the riverbed.

After a while, we reached an Annapurna Conservation Area (ACA) checkpoint where we registered our permits with the authorities. There is a small shop attached to the office with a selection of snacks and cold drinks from the fridge. We grabbed some ice cold pineapple juice cans and took a break while our details were being copied down into the registers. It’s also a great opportunity to take a photo with a big sign welcoming trekkers to the area.

We continued on for a while until we reached Bhulbhule and our first overnight stop of the trek.

Our first guesthouse of the trek was pretty basic but comfortable. It’s set just a few metres from the trekking path but is away from the main village and is pretty quiet. While the showers lacked hot water when we stayed, there was a western-style toilet – not to be taken for granted anywhere in Nepal! The rooms and facilities are set above the owners’ house and the outdoor dining area. This is set under a cover of trees and there are a few shaded spots to relax with a book or a cold beer. The food menu is – as almost anywhere along the Annapurna Circuit – pretty extensive and there is something for everyone. I went for a chicken soup and porridge with fruit for dessert. We washed the food down with some ginger honey tea. Every guesthouse will also ask for your breakfast order the night before to give them time to prepare it in the morning. This way it’s ready for whenever you want to have it. We would usually have ours between 06:30 and 07:15. You settle the bill in the morning prior to leaving the guesthouse.

I spent some time exercising – body weight stuff like push ups and using my resistance bands. This was a good opportunity to engage with some locals as a kid came over to see what I was doing. We chatted, he practised his English and even did some exercising with me! It was a great start to our Annapurna Circuit adventure. A day that started before sunrise and saw us travel from Kathmandu to Besisahar before walking to Bhulbhule.

Up Next: Bhulbhule to Jagat on the Annapurna Circuit – Day 2

2 thoughts on “Kathmandu to Besisahar and Bhulbhule: Starting the Annapurna Circuit”