Read on for a detailed account of our second day on the Annapurna Circuit. Today, we trekked from Bhulbhule to Jagat, covering a distance of 16km in around 7.5 hours. It was time to enjoy some great views of the trek and get away from the road for a while.

The second day trekking the Annapurna Circuit gave us a great idea of what we could expect going forward. Today’s route would take us from Bhulbhule to Bahundanda, from Bahundanda to Ghermu and finally from Ghermu to Jagat. Starting at just 840m, we would ascend to 1300m by the end of the day.  It’s a 16km and around 7.5 hours walk from Bhulbhule to Jagat including all stops.

Read on for my experiences, tips and advice from day two hiking the Annapurna Circuit Trek. 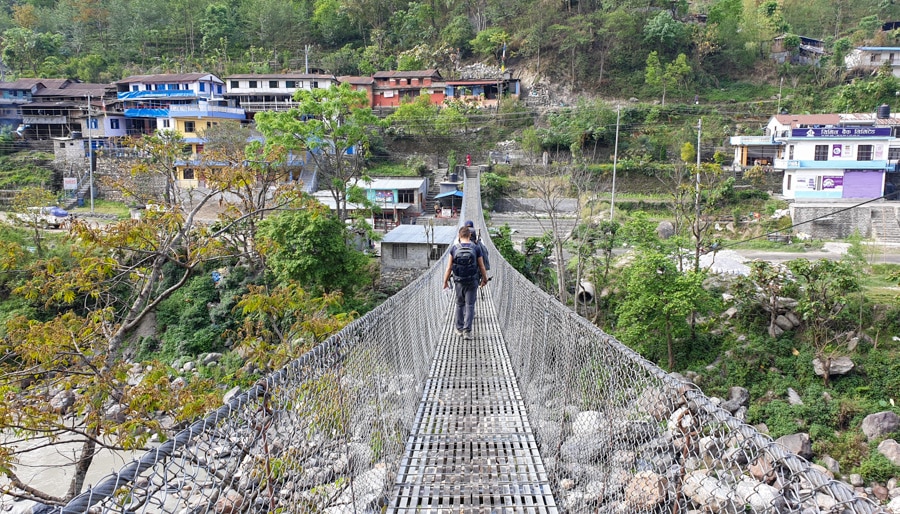 Day Two: Bhulbhule to Jagat on the Annapurna Circuit

While you could consider day one as “easing in” to the trek, there were no such luxuries on day two! We set off after breakfast and crossed the river via a suspension bridge (one of many on this trek!). Continuing along the road, we passed a small village of Ngadi. This flat section is wide and easy to follow. We passed small waterfalls and a hydropower station, which our guide told us are in important source of energy in Nepal.

We continued on for a while before coming across a fork in the road. The signs read “Off Road MANANG” and “Trekking Trail MANANG”. It’s pretty self-explanatory. Here, most vehicles take the route on the left bank of the river while hikers continue on the quieter trail. We opted for the latter, following the red and white markers indicating the main Annapurna Circuit trail. Seeing these means you’re always on the right track. You’ll also sometimes come across blue and white markers – these show alternative routes or side trips.

As we climbed higher, beautiful views of the valley, river and the surrounding mountains opened up. The path continued heading up past corn fields and terraces with local women tending to crops in the morning sun while men worked in nearby villages. We passed through some of these as locals waved to us and kids ran alongside us to ask us where we were from and show off their English skills. There is still technically a road that connects some of these villages but it’s not busy. We finally left the road and followed a tiny path which zigzagged up the hillside. We had to use our poles to haul ourselves up steeper sections.

Soon after we reached Bahundanda (1310m) where we stopped to refill our water bottles and take a break. The climb to the village was actually pretty tough especially in the morning heat. It was too early for lunch but we enjoyed some cold drinks and a breather. We saw a local man struggling with some pipes he was carrying and gave him a hand. Bahundanda was actually the highest point of the day’s trekking and after taking in the views the trail took us back down into the valley. It snaked past more fields and villages with cows, goats and chickens roaming around. We were getting a good flavour of rural Nepalese communities and an insight into what life was really like in this part of the country.

Our route took us along the “old” trail instead of the road which we could see across the river. This was a harder but definitely more scenic route plus offered some shade during the day while the road was exposed to the elements. We climbed steep stone steps and followed the trail along the side of a cliff with a precipitous drop on the other side.

This section was definitely a challenge as the path kept going up and down before levelling off just as we reached Ghermu. We stopped at Rainbow Restaurant Hotel & Lodge for a long lunch. There were beautiful views of the twin waterfalls from the terrace. It’s possible to spend the night in Ghermu which some people choose to do.

After filling up on dhal bhat and coffee, we continued on. It’s possible to continue avoiding the road by following the blue/white markers to Jagat but we opted to rejoin the road. The walking trail is significantly longer (7km+ vs 4km) and steeper than the road section and it really depends on how much time you have and where you are stopping for the night. The markers are pretty easy to follow though if you do want to take the longer route.

We crossed the river and followed the road. There were very few vehicles and we had it pretty much to ourselves. There was another punishing stair climb which served as a “shortcut” to avoid the zigzagging section of road. The stunning views of the mountains and a glimpse of our final stop of the day were worth it though! The road hugged the cliff with big drops all the way to the rushing river below as we neared Jagat.

We arrived exhausted and sweaty to our accommodation in Jagat and no sooner than we did, the skies opened up. It was an epic shower which we avoided by mere minutes. We watched the rain fall before having an amazing hot shower and relaxing in the common area before having a huge dinner to make up for all the calories lost during an epic day of hiking!

The guesthouse is along the main path through the village and hard to miss. There is a main house section as well as some simpler rooms towards the back of the place. Our rooms were in one of these wooden huts, overlooking the back yard and close to the bathrooms. The yard is spacious and there are chicken coops, a plant and vegetable garden and simple bathrooms. The solar showers were one of the best of the trip. No Western toilet though! The views from the yard are great as it backs pretty much straight onto a mountain side!

There is an extensive menu with loads of Nepalese staples as well as Western dishes. I plumped for a huge bowl of fried noodles, a plate of momos and a Tibetan-style bread. It’s fried, slightly sweet and very very delicious. I washed it all down with a bottle of Everest beer. Drinking alcohol at higher elevations is not recommended as it can exacerbate effects of altitude sickness but at just 1300m, this isn’t an issue. There is a covered terrace which is great for relaxing, reading and socialising. A few other groups of mostly French trekkers stayed at the guesthouse as well but it didn’t feel too busy.

We played cards and wrote in our diaries before heading to bed. It’s been a long day of trekking that saw us walk from Bhulbhule to Jagat. It was now time to head higher into the mountains!

Up Next: Jagat to Dharapani on the Annapurna Circuit – Day 3 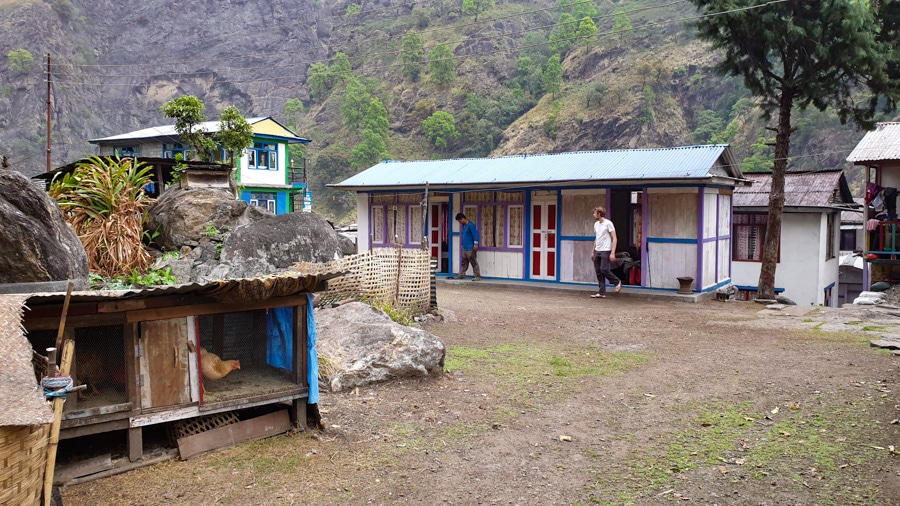 Chame to Lower Pisang on the Annapurna CIrcuit – Day Five

5 thoughts on “Bhulbhule to Jagat: Day Two On The Annapurna Circuit”