Read on for a detailed account of our thirteenth day on the Annapurna Circuit. Today, we trekked from Tukuche to Ghasa covering a total distance of around 20 km in around 7 hours. This was one of the longest days of the entire Annapurna Circuit and a significant portion of it takes place on the road (unless you want to make it even longer).

Our thirteenth day walking the Annapurna Circuit was one of the longest and featured a lot of road walking. Our route would take us from Tukuche to Kokhethanti, from Kokthethanti to Kalopani and from Kalopani to Ghasa. Starting at 2590m, we would descend to 2010m by the end of the day. It’s around 20 km and 7 hours walk from Tukuche to Ghasa including all stops.

Read on for my experiences, tips and advice from day thirteen hiking the Annapurna Circuit Trek. 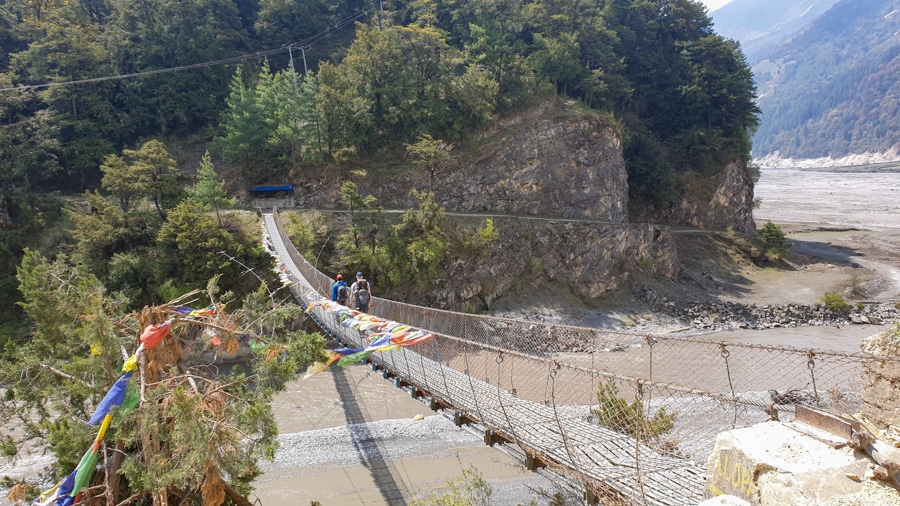 Day Thirteen: Tukuche to Ghasa on the Annapurna Circuit

Distance: Around 20 km (my watch died so not sure of exact distance)

After setting off from Tukuche, we followed the Kali Gandaki riverbed for a while. There are no safe crossings to the walking trail during certain times of year so we had to follow the road for a bit. In the dry season, there may be places you can cross using makeshift bridges that locals build – I say build, but these are generally just planks of wood. You can also double-back and head the way you came to the nearest bridge but that will add time to what is already a pretty long day. I managed to slip on some rocks while crossing a stream which meant wet feet for the next few hours.

Following the path signposted to Beni via Larjung, we walked past small villages as the trail weaved between fields with short stone walls on either side. Just past Larjung, the river sprung up again right in front of us. The road bends around but in certain conditions, it’s possible to take a shortcut right across the riverbed. It seemed passable so we decided to wade in barefoot.

The water was absolutely freezing and we had to cross a number of smaller channels . We could feel our feet seizing up and the sharp stones at the bottom made crossing tougher. We joined the road for a short while before crossing a suspension bridge back to the hiking trail. It’s signposted with Kokhethanti (Trekking Trail). Within 10 minutes we reached Kokhethanti itself, a small village with a couple of basic lodges.

This next section is the most pleasant of the day. There are small villages and forested areas overlooking the river. We headed through a dense pine forest before reaching a more open area where cows grazed in between trees and huge boulders littered the scene. Mountains provided a familiar backdrop. It was one of the most beautiful sections of the western side of the Annapurna Circuit. This route took us through to Kalopani, one of the bigger villages in the area with plenty of guesthouses and places to stop for food.

The alternative route is to take a different, higher trail from Kokhethanti towards Titi Lake and follow it through Chhoya to just past Ghasa where you can cross a bridge and backtrack slightly to the village. Unfortunately we didn’t take this route – this is probably one of the very few things I would change along the entire route. The route we ended up taking to Ghasa from Kalopani was one of my least favourite things about the trek.

Distance: Around 8 km (my Garmin died about 3 km out of Ghasa)

After an unremarkable lunch in Kalopani where the owner tried to overcharge us and was quite unpleasant (for the life of me I can’t find the name of the guesthouse), we continued on and soon joined the road. This time, we stayed on it until the end of the day. It’s a long and dusty slog towards Ghasa. The road zig-zagged loads and we got loads of pitiful looks from people on buses and air-conditioned jeeps. I found this to be the most miserable part of the entire circuit.

After what seemed like an eternity, we arrived in Ghasa. It was actually a really pretty village nestled in the valley. The setting, surrounded by mountains was picturesque. Our guesthouse looked out over the surrounding fields and I watched locals go about their business for a while from a terrace behind the rooms. We spent the evening relaxing in the common area and chatting over food and beer. There was another guy there who was the only other trekker we’ve seen all day!

Comfortable rooms, hot showers, wifi (more reliable in the dining area). I really liked this guesthouse – the owner was friendly, the food was good and overall the place was clean. The views are stunning. A little terrace on the first floor (the space right above the sign in the photo below) is a great place for some quiet time or exercise.

Up Next: Ghasa to Tatopani