Read on for a detailed account of our tenth day on the Annapurna Circuit. Today, we trekked from Thorong Phedi to Muktinath crossing the Thorong-La Pass, covering a total distance of 15.1 km in around 8.5 hours. This was a culmination of a lot of hard work, with the payoff being the opportunity to cross one of the highest navigable passes in the world.

Read on for my experiences, tips and advice from day ten hiking the Annapurna Circuit Trek. 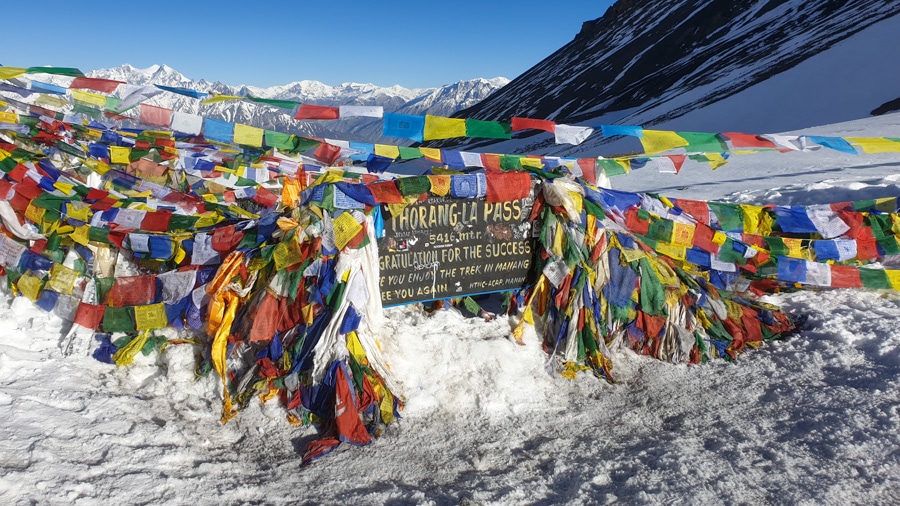 Day Ten: Thorong Phedi to Muktinath Via Thorong-La Pass on the Annapurna Circuit

Well, here it was! Today was the day we would finally be attempting to cross Thorang-La Pass – at 5416 metres, one of the highest navigable passes in the world. There was an air of excitement mixed with nervousness the night before but as our alarms went off at 3am sharp, we simply hauled ourselves out of our beds and got ready for what would be one of the longest days on the trail.

We picked at our breakfast of lukewarm porridge and Tibetan bread before making our final preparations. Armed with head torches, we were the first group to leave Thorong Phedi and begin the long climb to High Camp. It was just after 4 am and as we zig-zagged our way up, we started seeing a conga line of lights snaking up the mountain behind us. Having done a portion of this section of the trail on our acclimatisation work yesterday, we knew where we were going.

It was foggy before we went to sleep but the weather cleared up and the sky was pockmarked with stars. The moon was shining brightly which, together with our flashlights, helped us navigate the switchbacks. We got into a great rhythm and reached High Camp in just 50 minutes – instead of the advertised 1.5-2 hours.

After a quick stop at High Camp to use the facilities, we started making our final ascent to Thorong-La. This first section is a single-file affair, so you are only ever moving as fast as the person in front of you. There were already a few groups ahead of us, including the Indian group that we have been bumping into for the last few days. With over twenty members in their team, we wanted to get past them as quickly as possible in order to avoid the already-forming bottlenecks.

Much of the trail was covered by snow but it wasn’t too slippery and was relatively easy to navigate. Unlike the previous few days of hiking, I felt full of energy this morning. I developed a kind of rhythm, putting one foot in front of the other. Finding this extra gear, I went ahead and decided to get to the pass as quickly as I could. I didn’t really notice the altitude today and found it pretty easy to breathe. However it’s really important to go at your pace as you’re still tackling a difficult trek and the fact that you’re doing it at around and over 5000 metres makes it extra tough.

The sun started peeking over the mountains and covering everything in its warm glow. It may have been a cold morning but at 5000 metres the sun’s rays are pretty strong. I kept heading up, even managing to enjoy some of the stunning views around the trail which was marked by yellow/white metal poles and flags. I continued climbing higher but still felt that I had a while to go. Suddenly, I headed over a small hill and saw loads of prayer flags in front of me. Just like that I was at Thorong-La Pass!

The feeling was indescribable and I was ecstatic to be there after all the effort of the last few days. I took photos of the group that arrived just before me and posed with the Thorong-La sign. It took me 1 hour 50 mins to get to the Pass from High Camp and just 2 hrs 40 mins from Phedi (a break in High Camp aside).

Remarkably, there was a small teashop at the pass selling hot drinks and snacks. I treated myself to a giant mug of steaming hot black tea and some yak cheese. I was a fair bit ahead of my group so took time to enjoy the views around me and take a million photos and videos.

Eventually, more and more people started to arrive including my group. We embraced and congratulated each other on our achievement. There was an incredible feeling of camaraderie and accomplishment in the air as we all laughed and celebrated with all the other trekkers we’ve spent the last few days with. It will definitely go down as one of my most special memories ever.

After enjoying some more tea and yak cheese, our guide motioned for us to start getting ready to leave. After gaining almost a 1000m in just a few hours, it was time to descend down to Muktinath – a whopping 1700m lower than the summit! The hard work definitely wasn’t over! This is one of the reasons why summit day is considered to be so tough. I also hate going downhill because I find it way harder on my knees. Others may disagree but I would take going uphill any day!

This was the biggest and longest descent of the entire trip and our knees sure felt it as we zig-zagged down the mountain path. It alternated between being covered in snow, mud or just loose gravel. It was very slippery in places and everyone found it difficult to walk and keep their balance at times. I slipped and fell a couple of times, learning a valuable lesson in the process. Don’t follow in the footsteps of those who have crampons on their feet! What was an easy section for them was basically just pure ice for me.

We made a few stops to rest, enjoy the views and change clothes. Layers came in important today but the sun was high in the sky now and we could shed some of the warmer ones. After a long and arduous descent, we arrived at a small guesthouse/restaurant and rested for a while. We decided not to stop for lunch and just power on through to Muktinath. Continuing on the gravel path, we were low enough now to not have to deal with melting snow. It was also a lot flatter and easier to walk but it was still important to watch your step after a long day of walking. The landscape was very different here with red mountains and small villages in the distance.

We arrived at the outskirts of Muktinath and walked past a Hindu shrine. Muktinath is a major pilgrimage site for Hindus and is a huge part of the region’s economy. We walked past babas asking for offerings, stalls selling flowery necklaces and countless mules and horses ferrying pilgrims to and from the temple. The town reminded me of how the Wild West is represented in Hollywood movies. A dusty, unpaved road ran through the middle of town lines with countless cafes, shops and hotels.

We checked in to Royal Hotel Mustang where we had the most satisfying shower and sat down to enjoy coffees and lunch on the front porch. It was great to just relax, knowing that the hardest part of the trek was over.

We took a leisurely walk around town, visiting a Buddhist monastery and observing local women weaving and eating together in its grounds. Afterwards we went for drinks with some of the guys we met on the trek at their hotel. We chilled on the outdoor terrace, played pool, enjoyed coffees and cakes  and spent the evening with a big group of trekkers. An Israeli guy who carried a guitar all the way around the Annapurna Circuit entertained everyone with live music as we celebrated our achievements into the night.

Located at the far edge of Muktinath/Ranipauwa, this place feels a bit dated but is spacious and comfortable. Hot showers are a big plus but there are no Western toilets. There is a coffee machine in the cafe and the food is pretty good too. After such a long day, we genuinely didn’t care where we spent the night but if I could do it all over again, I would shop around.

Up Next: Muktinath to Jomsom