The cat approached confidently and weaved through my legs, rubbing its head against my skin. I splashed some water into a bottle cap and pushed it towards the feline who lapped it up before stretching contentedly in a shade of a fir tree. While this may seem like a relatively normal animal interaction, I can’t say I’ve ever hung out with a cat on a mountain peak before. In a Korean national park. In Seoul.

I have been in Seoul for less than 24 hours, but I was itching to get out and hike. Not because I didn’t enjoy the hustle and bustle of the city, the neon colours and people watching of Hongdae or the excellent cycling trails around Yeouido Hangang Park, all of which I was able to experience in my first half day in Korea. No, I was ready to hit the trails because the promise of a national park just a stone’s throw from central Seoul was too enticing to pass up.

Bukhansan National Park is located within the boundaries of Korea’s capital and as a result is very easily accessible from anywhere in the Seoul Metropolitan Area. This makes it understandably popular and Bukhansan is even in the Guinness Book of Records as the Most Visited National Park per Unit Area with around five million annual visitors. Yet, sitting at the top of Yongchulbong Peak (571m) with just a cat for company, you could be forgiven for thinking I was somewhere more remote. The only giveaway was the view of the Seoul skyline in the distance.

I was at the park entrance a little before eight AM. I walked past rows of outdoor gear stores, with almost every major brand represented. Koreans take hiking, their national pastime, very seriously so there are plenty of opportunities to outfit yourself head to toe with the latest and best gear. Tearing myself away from the latest technical hiking fleeces, I followed a scenic boardwalk trail to Bukhansanseong Info Centre.  There are vending machines and toilets along the way, perfect for last minute preparations.

While most visitors make a beeline straight for Baegundae Peak, Bukhansan’s highest point at 836m, I took a few detours to take in some of the park’s other highlights. Ok, fine, I got lost. While signage in the park is generally good, I managed to navigate away from my intended route, distracted by Bukhansan’s treasures.

The first of them, Guknyeongsa, is one of around 100 temples in the national park and is set away from main hiking trails, ensuring that it’s a surprisingly quiet and serene place with stunning views. The site of the temple has been in use for over a 1000 years. It’s home to a 24 metre Golden Buddha which is surrounded by a glass wall with thousands of smaller statues. There is also an active monastery onsite and I listened to a nun’s beautiful chanting while enjoying the sweeping views with not another soul in sight.

Leaving the temple, I climbed the narrow path to Gasadangammun gate, one of the secret entrances to Bukhansanseong fortress which was built in 1711 to protect the city from invaders. I followed the ridge along the remains of the fortress wall as the path started getting steeper and less, well, path-like.

If You’re Going To Get Lost, Then You Might As Well Go All Out

Soon, I was hoisting myself up giant rocks using steel railings and ropes tied to trees in my own Indiana Jones adventure. Though, I’m not sure Indy would get lost as quickly as I did. I almost tumbled off the mountain a few times too, distracted by the stupendous views that opened up on either side. I wasn’t surprised that there weren’t any other hikers around – while not extreme by any means, you need a reasonable level of fitness to navigate this section. Not to mention a head for heights!

After a quick break with my new cat friend, I continued my precarious journey along the ridge, traversing steel stairs and hanging on to rope railings until I reached Yonghyeolbong (581m), my second peak of the day! Not bad considering I was “lost”.

Eventually, I descended into the forest, picking up the trail again and passing guard posts, temple ruins and info points, stopping to read fascinating insights into the history of the area. Next, I headed to Daeseongmun, one of the Bukhansanseong’s six Great Gates and marvelled at its ornate roof. This was the first time I saw anyone in about two hours with a few ajummas enjoying a morning hike. This was a great opportunity for a break and a bite to eat.

I resisted temptation to head on another detour (Bibong Peak would have to wait!) and followed signs to Baegundae Peak. The trail zig-zagged through the forest and along another fortress wall section before starting to climb up. Steep steel stair sections were interspersed with tougher scrambles over exposed rocks as I took the road-less-travelled to approach the park’s most popular spot.

The trail eventually joined the single route to the top and I proceeded to pull myself up using the now-familiar railings in the punishing late morning heat. The hard work was more than worth it though. After the final push, aided by footholds carved into the rock, I stood at the top!

The views were spectacular. The city sprawled out in front me as far as the eye could see, like it was in the palm of my hand.  The neighbouring peaks jutted out of the forest that covered the park like a green carpet.

There were other hikers around but the peak wasn’t as busy early on a Friday afternoon as it would be on a weekend when thousands of Seoulites turn up at Bukhansan armed with selfie sticks and sporting the latest hiking gear.

As it was, I navigated my way to the large rocky outcrop just beneath the peak and sat down to take in the views while tucking into my peanut butter and jelly sandwiches. Like my furry friend on the other side of the park, I truly did find peace at the top of a mountain.

Getting to Bukhansan National Park

To get to Bukhansan, take the subway to Gupabal Station, take Exit No. 1 and catch the 704 bus bound for Bukhansanseong Fortress and get off at the Bukhansan Mountain entrance bus stop. Just follow people who look like they are going hiking. They are most likely headed in the right direction. 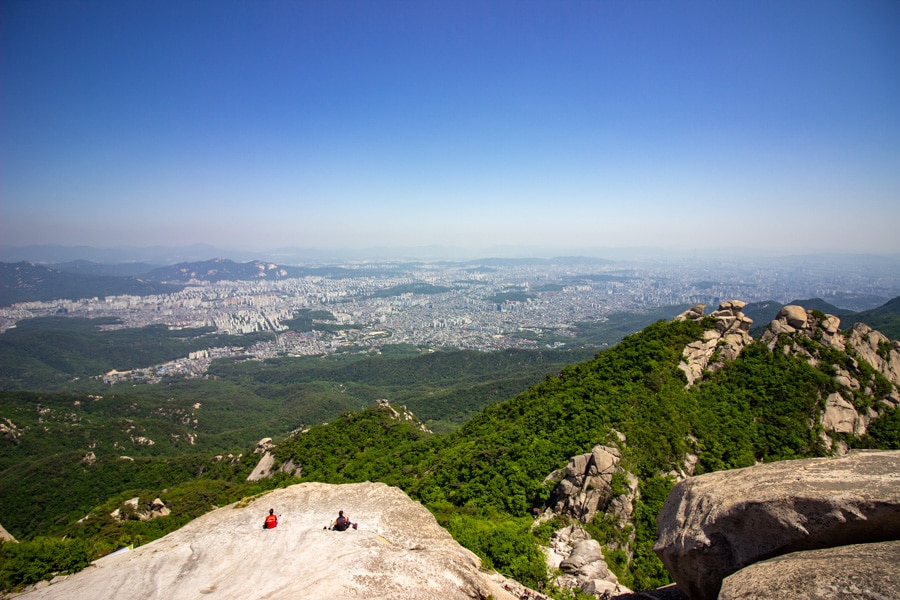 Disclaimer: This post is a paid partnership with the Korean Tourism Organisation as part of their #SeeKoreaNext campaign. As always, all thoughts, opinions, recommendations and images are my own.

Here are some of my other must-read South Korea posts to help you plan your trip! 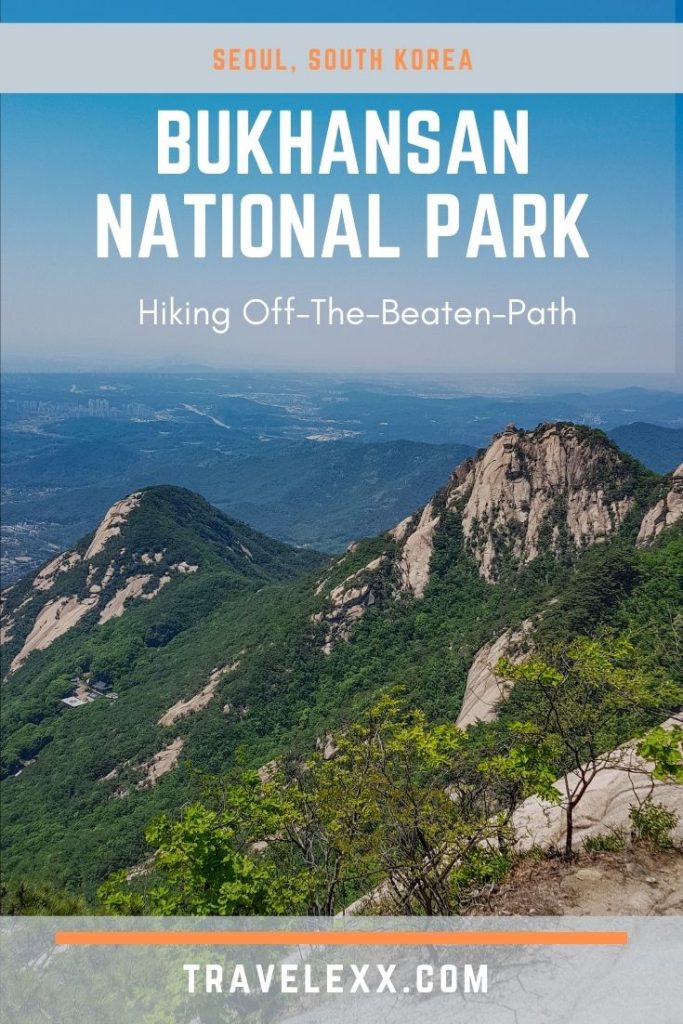