One of the most fascinating places I got to visit in my time in South Korea was Gosu Cave, a huge limestone cave near Danyang. Formed tens of millions of years ago, this natural wonder offered a unique glimpse into a mystical underground world. With stunning Sobaeksan National Park and Guinsa Temple in close proximity, visiting the cave is a no-brainer! Here’s how to make the most of your visit to Gosu Cave. 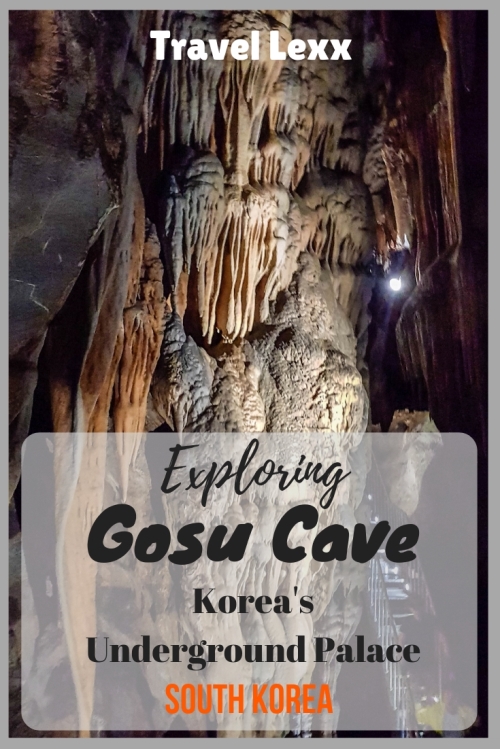 Gosu Cave is a multi-level limestone cave located near the town of Danyang in the Chungcheonbuk-do province. It’s tens of millions of years old, having formed over time from limestone that was deposited during the Ordovician Period (around 450 million years ago). When the cave was discovered, tools and instruments were discovered near the entrance suggesting that the cave was once home to prehistoric humans.

It opened to the public in 1976 and was designated a Natural Monument. The length of the cave is approximately 1395 metres and much of it can be explored via metal walkways and stairways twisting through the caverns. Its stunning geological features have earned it a nickname of “underground palace”.

There is a newly-built visitor centre at the entrance to Gosu Cave where you can buy  tickets and leave your stuff in the lockers provided (bags and cameras are NOT allowed in the cave. I did manage to take some shots with my phone camera though). Your entry fee includes a pair of gloves which come in handy when navigating the narrow passages inside, especially in winter. The centre also includes plenty of information and interactive displays about Gosu Cave and geology in general. There is English signage throughout and there is plenty to see before you even get inside the cave. Kids are especially well catered for with loads of fun visual stuff to keep them busy.

After ascending a set of steps, it’s time to head inside the cave! The pre-set route allows a chance to see some incredible speleothems (cave formations). There are many stalactites and stalagmites which are incredible to see up close as well as less well-known formations. Gosu Cave boasts columns (formed when stalactites and stalagmites meet), soda straws (essentially young stalactites) and even cave shields which are not commonly seen in other caves.

[themify_quote] Stalactites hang from the ceiling, composed of minerals deposited from water falling from above. [/themify_quote]

[themify_quote] Stalagmites grow upwards but are also formed thanks to mineral deposits that have precipitated from falling water. [/themify_quote]

The walkway leads deep into the cave as you take in the sights and sounds around you. As you make your way around the course, you might glimpse lightning-quick shapes fluttering past. The cave is home to bats and you can sometimes see them suspended from the cave ceiling. Water plays a vital part in any cave system and you can see underground lakes and streams as you wander around.

The walkways zigzag up and down steps and at times I had to squeeze through small openings in the rock. It’s hard to take your eyes away from the jaw-dropping formations inside but do keep an eye out on where you are going! There are attendants throughout the cave who can answer questions and point you in the right direction. Most signage inside the cave is in Korean so make sure that you make the most of that visitor centre at the start of your visit! The entire walk should take around 45 minutes but you can go at your own pace. Just be prepared to let people pass if you want to linger at a particular spot as the cave can get busy!

A visit to Gosu Cave is a great way to learn about geological formations and caves in general. It’s one of the top things to do in Danyang and makes a trip to this corner of Korea even more enjoyable!

Check out my 15 Reasons Why You Should Visit South Korea

#1 Mind your head – keep an eye out as you are walking around the cave. Pay attention to signs that warn of potential hazards

#2 If you are visiting Sobaeksan National Park, it’s possible to fit a hike and a visit to Gosu Cave into a half day. I asked the driver to stop at the cave on the way back from Sobaeksan and he was happy to let me off.

#3 The average temperature inside the cave is 15 degrees Celsius.

#4 Don’t bother bringing a big camera – you will not be able to take it inside the cave. I don’t even think that phones are allowed. Oops!

#5 This might sound obvious but there are no toilets inside the cave. So make sure you are fully prepared before you enter the cavern!

Getting There: Getting to the cave couldn’t be easier. It’s only a short walk away from Danyang. From the bus station, cross the bridge, turn right and follow the road for about 5-10 mins. Alternatively bus number 170 goes to Gosu Cave from the bus station. Check the times at the station.

Price: 11,000 KRW (adults) – check. This includes entry to Gosu Cave, permanent displays at the visitor centre, a locker to put your stuff in and an awesome pair of gloves! I think you also get a small bottle of water, but don’t quote me on that!

What: Gosu Cave is a huge limestone cave near the town of Danyang in South Korea. A series of walkways allows visitors to explore the cave and marvel at many geological formations within.

Accommodation: I stayed at the awesome Us on Earth guesthouse. It’s one of my all-time favourite places to stay in. Cosy rooms, fully-stocked kitchen, spacious living area, huge patio and stunning views of the mountains come as standard. It’s budget-friendly too! The great reviews have definitely been earned.