Walking a part of the ancient Nakasendo Way was one of the must-dos on my trip to Japan. While hiking may not immediately spring to mind when coming up with an ultimate Japan bucket  list, I could not miss the opportunity to walk in the footsteps of shogun and samurai. I ended up discovering not just an awesome hike, but a window into the country’s past.

After the previous day’s adventures exploring Magome and the Stone Pavement of Ochiai, it was time for the big one! The 8 km hike between Magome and Tsumago is one of the best walks in the country and is featured in most guidebooks as one of Japan’s top experiences. It was even featured in Joanna Lumley’s Japan TV series in 2016. As a keen hiker, I definitely wanted to check out what all the fuss was about!

Magome and the Nakasendo Way

After a hot shower and a delicious set breakfast at my guesthouse, I was ready to hit the road. I headed uphill on the empty main street (the coaches carrying the daytrippers were yet to arrive) past beautifully restored houses and neat, traditional gardens. At the edge of the town, I stopped to check out a noticeboard, which back during the Edo Period would have been used to display important announcements and prohibitions.

Just a little further, I came out to a viewpoint with sweeping views of the valley and the mountains beyond – the autumn colours and the jagged peaks providing a beautiful backdrop!

The trail followed a road for a while before climbing through forested areas and a small village with a shrine at its edge. I grabbed a bamboo walking stick from outside a small café (the sign asked to deposit these back in Tsumago) and continued on.

While I was a little worried about the trail being overrun with tourists clutching their guidebooks and selfie sticks, my fears were quickly dispelled. I only met a handful of people on my walk and largely had the trail to myself. The cold November air in the mountains probably had something to do with it!

Around 2km in, the path headed deeper into the forest and became a bit more remote but was still well-kept and easy to follow. I walked along and over small streams, past trees sporting autumn leaves and spied markers and tablets on the side of the path.

One thing I didn’t expect to see on the walk were bear warnings! Black bears inhabit this part of the Kiso Valley even though sightings are rare. Nevertheless, bells were placed along the trail, prompting walkers to “ring hard against bears”. You didn’t have to ask me twice!

A bit further on, I emerged by a traditional Japanese teahouse and a popular rest stop on the walk. Those who watched Joanna Lumley’s Japan series would immediately recognise the tea room – and Mr Suzuki (“like the car”) – who greeted me outside the entrance.  The teahouse used to be an inspection post used by the Government to monitor travellers and goods passing through.

I continued through the forest, ringing the bear bells as I went, admiring the beautiful scenery and silence of the forest. I stopped to check out a “union tree” – two cypress trees that were planted in the early 18th century and grew together before eventually intertwining!

The trail is very well signposted in English, with clear directions and distance markers at regular intervals – it’s ideal for novice hikers as you would have to try very hard to get lost!

Soon after I saw the first group of people I’ve seen since leaving Magome – Japanese hikers whose clothing and equipment were probably a little too advanced for this hike. I say “saw” but I actually heard them first – they had their own bear bells attached to their clothes! I am not sure many bears would hang around with all that racket!

After about 5km, I reached the Otaki-Metaki Waterfalls – or Male and Female Falls as they are also known! The falls were made famous by a fiction book about the life of a famous samurai Miyamoto Musashi. The story goes that Miyamoto and his travelling lady companion cooled tensions between them by standing in their respective waterfalls.

I got as close to the falls as I could, which made clambering back up the rocks a little challenging as I tried not to fall in! The beautiful waterfalls and the streams flowing through the forest around them are definitely worth a short diversion from the main trail!

The trail passed another village before climbing again – offering some great views over the surrounding area. I passed a small tablet commemorating cattle that died on the Nakasendo – which was unusual as these usually honoured horses (that’s what the sign said anyway).

The path descended and took me past more villages, through crop fields and across rivers as well as a bamboo forest!

I eventually reached Tsumago, its wide streets almost empty save for a first small coach group of the day.

Tsumago, one of the many post towns along the Nakasendo Way, served as a rest stop for travellers, including prominent shogun and their entourage. The towns offered accommodation, food and a break for the horses. With rail travel becoming more prominent at the end of the 19th century, post towns declined in importance until restoration projects in the latter part of the 20th century brought towns along the Nakasendo back to their former glory.

Tsumago felt a bit more rustic than Magome, which gave it a lot of charm. Both towns have suffered from many fires over the years but Tsumago has been affected less which, together with impressive restoration and Government protection, has led to it feeling more authentic.

I wandered along the main street, past shops and traditional houses, peering into shrines. I spotted a sign for Tsumago Castle ruins and climbed a path for another kilometre, passing through a bamboo forest and a filled in section that used to be a wooden bridge!

The castle was demolished centuries ago so there weren’t any ruins to see per se (other than a few stone pillars and markers) but the views of Tsumago and the valley around it were fantastic!

I returned back to Tsumago and saw a noticeboard just like one in Magome. It’s still possible to read the messages – if you know Japanese!

I stopped for a much deserved break at a small café and had a delicious lunch gohei mochi – grilled rice cake with walnut sauce, a red bean anko (a pastry with red bean paste) and sweet milk tea. I enjoyed the mochi so much, I ordered seconds!

Back on the trail

After resting my legs, I started making my way back to Magome. While there is a baggage forwarding service between the two towns, I left my bags in the guesthouse as I found it would be easier to get to Nagoya, my next destination, from Magome. Plus I wanted an extra challenge – if you are going to do one of the best hikes in Japan, you might as well do it twice!

I made quick progress as I stopped less to take photos and look around. I encountered a few more people heading to Tsumago – while it was by no means busy, I was glad that I set off early!

End of the road

Soon after saying goodbye to my trusty walking stick, I arrived back in Magome. I headed to the tourist information center and bought a commemorative wooden certificate (¥300) to confirm that I’ve completed the hike. It was even stamped, however there was no special reward for doing the walk twice!

After enjoying a warm rice cake – sour plum and sugar flavour – and wandering around the town for a little while, I picked up my bags and made my way down the hill to the bus stop to end my ancient Nakasendo adventure and head back to modern Japan.

What: The Nakasendo Way is an ancient highway used during the Edo Period. Post towns along the way were used as rest stops by travellers. Magome and Tsumago are two restored towns and it’s possible to hike between them along the Nakasendo

Where: Nakasendo Way stretched between Edo (Tokyo) and Kyoto. The Magome to Tsumago section is in central Honshu.

How: The hike is very well signposted from both Magome and Tsumago. It’s an easy 8km walk with some uphill sections – Magome to Tsumago is slightly easier than the other way round. The round trip took me 3hrs 30 minutes to complete not counting the Tsumago Castle detour  (1km each way), Otaki-Metaki falls (50 metres from trail) and time exploring Tsumago.

There is a baggage forwarding service available from tourist information centres in both Magome and Tsumago. You need to drop the bags off between 08:30-11:30 and they will be delivered by 1pm. Cost – ¥500. This service is available from mid March to late November but dates will vary. Check here for 2017 dates as they become available.

Getting there: Both Magome and Tsumago are accessible by public transport from all major cities. Magome has more connections than Tsumago so plan accordingly. Getting to either town can be done by using the JR Rail Pass. For a comprehensive guide to getting to Magome and Tsumago, visit this website. 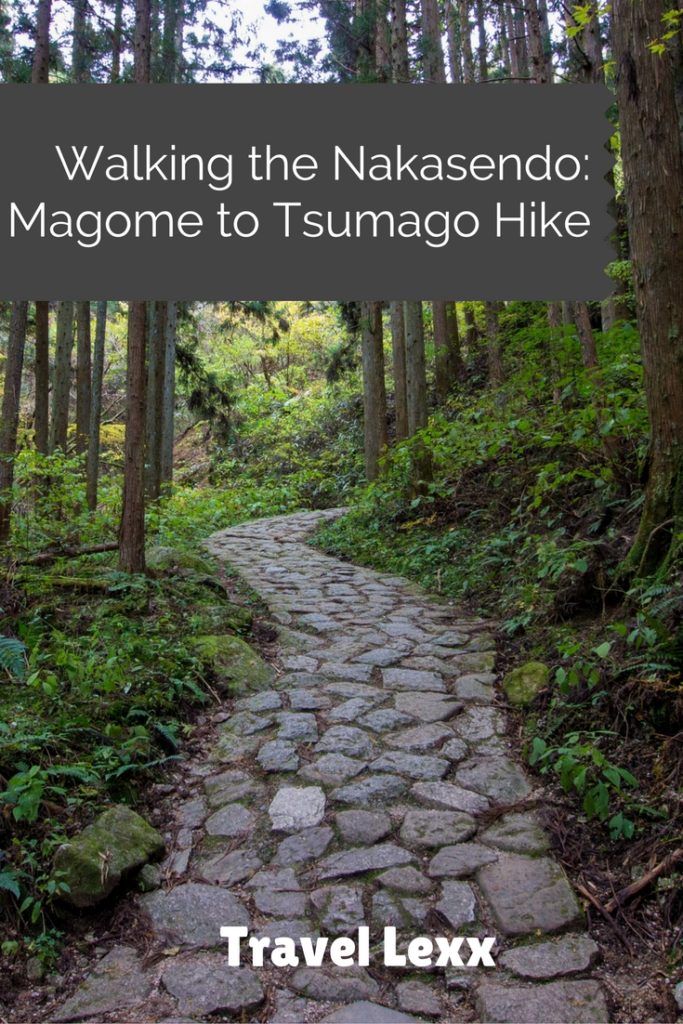 28 thoughts on “Walking the Nakasendo: Magome to Tsumago Hike”