Porto’s growing cycling scene makes it easy to escape to explore away from the historic city centre.  After a local’s tip, we decided to pedal further afield to visit the picturesque Capela do Senhor da Pedra (Chapel of the Lord of the Stone). Believe me, visiting this tiny chapel perched on rocks jutting out into the Atlantic is a highlight of any Porto visit! 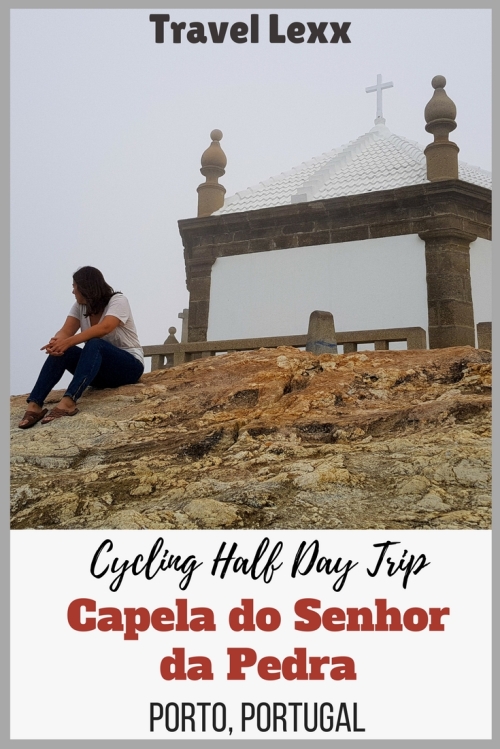 Capela do Senhor da Pedra: A Cycling Half Day Trip from Porto

Porto is a hilly city (as my quad muscles could still attest to for days after visiting). Wandering up and down the many slopes and stairs of the UNESCO-listed old town and surrounding districts is par for the course here. So I was quite surprised to learn that cycling is popular with locals and tourists alike. With dedicated cycle lanes and free transportation of bikes on subway and trains, it’s a great option for getting around.

Armed with this info, we jumped at the opportunity to hire some bikes and head out of the historic but touristy Ribeira district. We settled on L&L Rent a Bike, their office in Ribeira just a few minutes’ walk from our hostel. The guy at the office helped us pick the bikes, adjusted the seats and even gave us his WhatsApp number in case we had any problems.

“You should definitely go and see Capela do Senhor da Pedra”, he said as we discussed our plan of action. “It’s definitely worth the trip”. After showing us photos of the chapel, we were sold!

Cycling along the Douro

We took the bikes down towards the Douro River and started cycling along the tram tracks that double up as a bike lane and a pedestrian sidewalk that runs along a busy road. The historic Number 1 tram runs along the route to the Foz do Douro seafront area but the tracks are available for all to use. We rode carefully to ensure the bike wheels didn’t go onto the rails themselves to avoid slipping.

After a while, a cycle lane materialised right next to the river. This meant we could finally stop worrying about getting hit by a tram! We cycled along the Douro, past joggers and fishermen, the port industry hub of Vila Nova de Gaia rolling by across the water. We passed underneath the towering arch of the Ponte d’Arrabida bridge before arriving at a small ferry pier. For a couple of euros, the boat takes passengers (and their bikes) across the Douro to the Afurada fishing village.

After a short crossing, which affords great views of the city, we found the cycle path that runs alongside the river. The path is actually part of the 9000km Atlantic Coast Route, with the Portugal section stretching from Caminha in the north all the way to the Algarve in the south!  We were nearing the river estuary, where the Douro meets the Atlantic Ocean. Soon, we were cycling along sandy beaches or praias, lined with giant boulders in places.

It was a warm but foggy day as we cycled past beachside cafés and bars which only a few weeks ago would have been packed with tourists and locals enjoying the hot summer temperatures. Their deckchairs were largely empty but people strolled and walked their dogs along the bike path and on the boardwalks running alongside the seafront.

The path was flat and easy to follow, making it a great option for all, regardless of fitness level. We hopped off our bikes often to take photos or simply to wander down to the beach. It runs alongside the ocean for the most part but at times does head next to a less picturesque main road.

Eventually we reached Praia de Miramar. The beach was our final destination as we spied the Capela do Senhor da Pedra by the water’s edge. We locked up our bikes and walked barefoot across the sand to the chapel. The fog gave it a mystical, almost eerie feel as it rose out of the rocks surrounding it.

We climbed the steps to the entrance to the chapel. It was built in 1686 on a spot that was once a site of ancient pagan worship. The idea behind the chapel was to apparently “reclaim” the land from the pagans that used it for their rituals. The blue azulejo tiles that flank the entrance mention the site’s importance as a historic and archaeological site. Inside the small space are three stunning altars, beautifully decorated with images of Christ and saints.

Interestingly enough, locals celebrate the site’s pagan roots in an annual festival with events and processions taking place around the local town of Miramar. The festivities draw visitors as it also doubles up as a sort of pilgrimage to the site! To add to the mystery of the site, full moon nights see secretive ceremonies take place on the rocks around the chapel. Visitors sometimes find candles scattered around the area following these rituals.

At the edge of the world

We walked around to the back of the chapel and stepped through an opening in the railing onto the rocks. Huge waves crashed all around us, smashing against the rocks and sending spray in all directions. The visibility was low but this just made the sounds of the ocean even more pronounced. We sat and contemplated being at the edge of the world, the other side of this vast expanse being the east coast of the United States.

There was something really calming about the spot. Maybe it was the rhythmic crashing of the waves. Or the lack of tourists – Capela do Senhor da Pedra is somehow not on many visitors’ radars. I went off to explore the site and couldn’t resist climbing all over the rocks, eventually finding a hard-to-reach spot where I dangled my feet over the crashing waves and just let my mind wander.

I could definitely understand why the site had such a spiritual significance. There was definitely something special and dare I say, magical, about it. I really hope that mass tourism doesn’t spoil it in years to come!

We started cycling back the way we came but there is an option to take a train back to Porto from the nearby train station at Miramar if your legs are weary.

We decided to take a walk along one of the boardwalks that ran alongside the beach. While you are not allowed to ride along them, it’s a great way to explore the area and get a closer look at the flora and fauna. We didn’t want to walk too far from our bikes so decided to grab a bite to eat at one of the beachside spots. Daikiri Lounge Bar seemed perfect with its terrace looking out over the ocean. I settled on a “light” lunch of granola with yoghurt and fruit and a healthy wrap followed by coffee.  The bar also has a cool little shop at the back selling locally made clothes!

The sun began to break through the clouds and mist as we cycled back. We stopped at a rocky beach before exploring the boardwalks of the Local Nature Reserve of Douro Estuary. This protected area is dedicated to provide a safe place for local and migrating birds. We walked to a couple of hides where it’s possible to see some of the over 200 species registered in the reserve.

We continued past the marina and soon arrived back to the ferry which took us back across the Douro. Taking this half day trip to the Capela do Senhor da Pedra was one of the highlights of our Portugal trip. If you find yourself in Porto, cycling to the chapel is one of the coolest trips you can take outside the city centre!

If you liked this post, check out my other blogs on Portugal!

#1 There are various places to hire bikes in Porto. The Ribeira district has a number of bike shops, including L&L. Rental starts from only €2.5 an hour/€12.50 for the full day.

#2 Make sure you ask for a lock when renting your bike so you can safely secure it while exploring the chapel or getting a bite to eat.

#3 From the Church of Sao Francisco (Igreja Monumento de Sao Francisco) it’s a 13km ride to Capela do Senhor da Pedra. First part of the ride is along the tram tracks – watch out for trams and avoid cycling on the actual rails as the wheels WILL lose grip. The ferry stop is about 200 metres west of the Ponte d’Arrabida bridge. Ferries don’t operate on Mondays. Once across, cycle towards the marina and you will pick up the cycle path.

#4 Alternatively, you can follow the bike trail along the Douro from Vila Nova de Gaia to the marina and then following the route described.

#5 We covered the entire route (without stops) in about an hour one way cycling at an average pace. This doesn’t include waiting for a ferry, photo stops etc. This itinerary can be easily done as a half day trip.

#6 Bikes are allowed on Porto’s subway and trains – the nearest station to Capela do Senhor da Pedra is Miramar – a short walk from the chapel.

What: Capela do Senhor da Pedra is a 17th century chapel built on a rock on the shores of the Atlantic Ocean.

Where: The chapel is in the town of Miramar, just south of Porto

Getting There: Using a cycle path which forms a part of the Atlantic Coast Route, it’s easy to reach the chapel on two wheels. Alternatively take the train to Miramar from Porto Campanha station (around 20 minutes). Check out the excellent Comboios de Portugal website for bookings and timetables (in English).

Accommodation: We stayed at the Bluesock Hostel in Porto – located right in the heart of Ribeira, only seconds away from the Douro river. Comfortable dorms, clean bathrooms, filling breakfasts and various events and activities are available. There is a great bar and social area.

17 thoughts on “Capela do Senhor da Pedra: A Cycling Half Day Trip from Porto”