In Part 3 of my Ultimate Bangkok Travel Guide, I focus on essential information for visitors to the city including how to get around on public transport, where to stay and how to exchange your money!

Where: Bangkok is the capital city of Thailand.

Currency exchange: As ever, avoid changing your money at the airport as you will get massively ripped off. Either bring baht with you or go to my favourite exchange place in Bangkok – they have a few branches around the city and have great rates. I highly recommend them!

Electricity: 220 V. Thailand uses flat and round two-pronged plugs so if you are from Europe or USA, you should be able to plug in your appliances. IMPORTANT: check your device to make sure the voltage matches Thailand’s – any devices that only run at 110-120 V will be fried!

Tipping: Not generally expected in Thailand. In more upmarket places, service charge of 10-15% is usually added. If it’s not, leaving a 10% tip is more than adequate if the service was good.

Pharmacies: There are loads of pharmacies around and many are open late and some even 24 hours! Many medicines can just be bought over the counter and most staff will speak great English.

Hospitals: Healthcare is excellent in Thailand and there are many hospitals in Bangkok that will offer services on par with Western countries. Check out this link for more information.

Bangkok and Thailand’s main international airport is located about 45 minutes away from the city. It’s modern and has good facilities. The cheapest way to get to the city centre is by Airport Rail Link – follow the signs to the train station and get a token from one of the machines (45 baht) – you will want to go all the way to the last stop – Phaya Thai. From there you can change to the BTS which will likely get you close to your accommodation. If you are staying at Khao San Road, take the train to Phaya Thai and grab a taxi – way cheaper than getting one from the airport!

More info: Visit the Suvarnabhumi Airport website for more info. For a useful map and timetables of the Airport Rail Link, click here.

Bangkok’s secondary airport can be a bit of a pain to get to so make sure you allow plenty of time. You need to take the BTS to Mo Chit and change to the A1 airport bus. Once off the train, face Chatuchak Park and head down the set of stairs on the right on the same side of the road as the park – the bus stop will be a little ways in front of you. There can be a LOT of traffic on the road to the airport so be patient and make sure you’re early. Don Muang isn’t fancy but all the low-cost airlines use it and that’s one of the cheapest and most efficient ways of travelling in SE Asia.

Tip: There is a free shuttle bus between Suvarnabhumi and Don Muang – very handy if you have time to spare and need to get between airports without heading into the city. It runs from 05:00-midnight and even though I haven’t used it myself, it seems like a good option if you are heading out of Bangkok via a budget airline.

Bus travel is super cheap and can be surprisingly comfortable in Thailand. Bangkok has a number of bus stations, serving different parts of the country. While minivans tend to serve closer destinations, some of the coaches used for longer journeys are top class. The Nakhonchaiair Gold Class service from Mo Chit Bus Terminal to Chiang Mai, for example, costs less than £20 but has reclining seats, onboard entertainment and regular meals on board (get someone at your accommodation to book for you)! Some destinations such as Koh Chang are easier to reach by bus – journey time around 5/6 hours from Ekkamai. If you are on a tight schedule, it’s always advisable to book ahead – but you can usually just turn up and buy a ticket at the station.

Mo Chit Bus Terminal – serves many parts of the country and even has some routes heading to Cambodia and Laos.

If train travel is more up your street, Bangkok’s central station is a great place to start. The overnight service to Chiang Mai is cheap and passes through some lush landscapes on its journey North. It was one of my favourite experiences in Thailand and I highly recommend it. You can head pretty much anywhere in the country from here and trains also go towards Thailand’s land borders with Laos, Cambodia and Malaysia. To get here take the MRT subway to Hua Lamphong. The station is also handy for visits to Chinatown and the Wat Traimit temple.

Bangkok Public Transport and Getting Around

The Bangkok Mass Transit System or Skytrain as it’s better known, is one of two train systems in Bangkok. True to its name the Skytrain uses rails elevated high above ground and journeys offer a great perspective of the city. The network has two lines that intersect at Siam station. I use BTS quite extensively when I am in Bangkok as it’s a fast and cheap way to get around. The trains are nicely air-conditioned.

Price: Tokens for use on the Skytrain cost between 15 baht and 52 baht but I find it easier to use the Rabbit card (more on that later).

Fun Game: I call this the BTS Rodeo. The platforms are guarded by VERY serious-looking guards. Step over the yellow line and see how long you can last before you get whistled at by the guard and told to get back!

Get a Rabbit card for use on Skytrain

Easily one of my favourite tips for Bangkok. BTS ticket machines at stations can have huge queues with locals and tourists alike trying to buy their single use tickets. The Rabbit card is a reloadable smart card which allows you to touch in and out at BTS stations without queuing – and you can top up as much as you want at staffed ticket windows. This saves a lot of time and also beats having to carry loads of change around! You pay a small refundable amount to get the card and then top up as you like.  You can also add a 30-day trip pass if you are planning on staying in Bangkok for a while.

This is the underground/subway system of Bangkok. There is currently only two lines but the system is rapidly expanding and there might be as many as five lines by 2021! MRT interchanges with the Skytrain at three stations and can be useful for reaching areas not served by the BTS. You will most likely use it to get to the Hua Lamphong train station which is at one end of the line.

Price: Tokens for use on MRT cost 15-40 baht. The network uses its own tokens and doesn’t accept the Rabbit card (even though I feel it will eventually).

The Chao Phraya Express Boat is a great way to get to some of Bangkok’s key sights while experiencing what life is like on and around the “lifeblood of Bangkok”. While dedicated tourist boats are available, jump on one of the local lines and enjoy the ride. Boats can get really packed, especially in rush hour and you will definitely have a unique experience. The engines chug away, billowing smoke around you; conductors push past those getting in their way; and staff athletically tie the ropes at every stop to allow people to get on and off. You will see barges floating upriver, locals ferrying goods across the water and stunning temples on the banks.

How: One of the best ways of experiencing the river is to take the BTS Skytrain to Saphan Taksin and walk down to Sathorn Pier (Central). Chao Phraya Express Boat operates different routes – the boats have coloured flags signifying which one you are on – and make stops accordingly.

This site has a great guide to all the stops along the network.

This blog has a super helpful map of all the routes.

Buses are less popular with tourists in Thailand as they are often a slower alternative to already cheap BTS/MRT/Ferry systems and are usually not signposted in English. Having said that, you might need to use the bus if heading to Don Muang airport from Mo Chit as mentioned above.

Taxis are very easy to find all over the city and there will be plenty of drivers vying for your attention. ALWAYS make sure that the driver uses the meter – ask before getting into the cab in order to avoid getting ripped off.

Not for the faint hearted! Bangkok’s famous three-wheeled rickshaws weave in and out of (sometimes oncoming) traffic, honk at each other (and everyone else) and often blast music from their speakers. It’s definitely an experience but be aware of touts offering to take you on tours of the city. These usually hang out around major sights and are normally working for commission from tailors or jewellers where you will invariably end up if you accept the offer. Otherwise – flag one down, hold on tight (to the tuk tuk as well as your possessions, headwear, children) and enjoy an incredible ride through Bangkok’s chaotic roads.

Bangkok has accommodation options to suit all tastes and budgets. From cheap backpacker hostels to fancy 5-star hotels, there is plenty of choice. Bangkok is probably THE place to splash out on a top-notch stay as there are always great deals for even the best hotels. Always check sites like Agoda.com and lastminute.com or visit the hotel’s own website.

I usually stay in Lub D Silom hostel near the city’s financial district. While most backpackers head to Khao San Road, I prefer the quieter parts of the city. Having said that, if you want to really be in the thick of the action, there are plenty of hostels and guesthouses on and near Khao San.

Those after a hotel in a great location should look at places around the Sukhumvit area or look at some of the options by river including the luxury Shangri-La hotel.

This site has pretty much everything you need when looking at hotels in Bangkok.

Do you have any tips for getting around Bangkok or where to stay? Let me know! 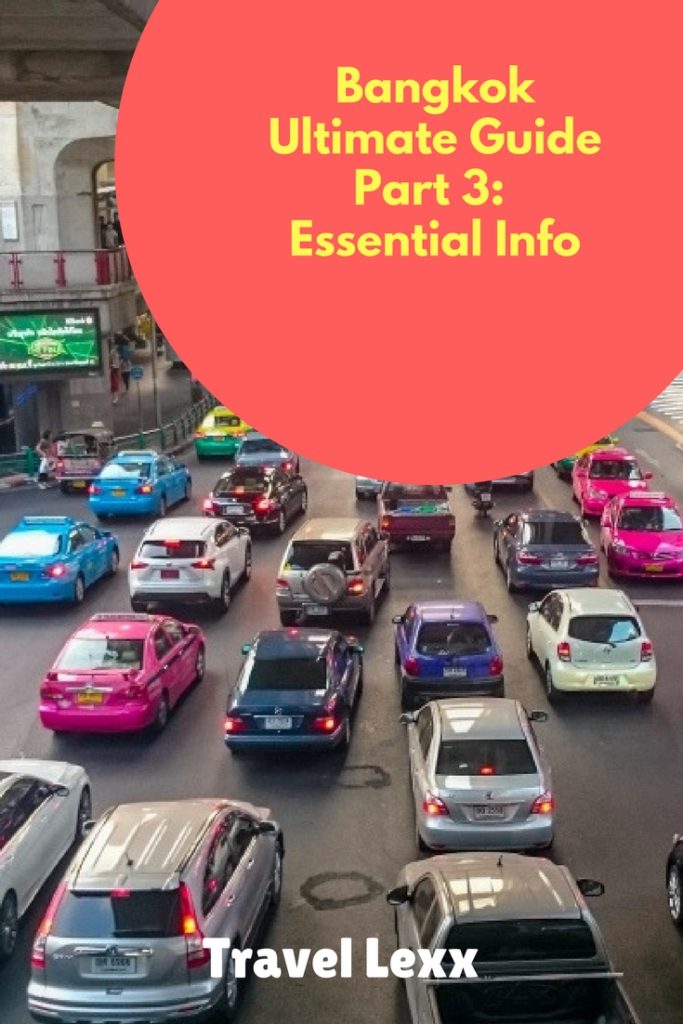