Here is a list of some of the best things to see and do on your visit to the Moroccan capital.  Let me know if I have missed anything out in my list of Marrakech sights in the comments!

Get lost in the Marrakech souqs

Wandering around in the Marrakech souqs is an essential Moroccan experience, so put away your map and dive in. You can find pretty much anything among the narrow alleyways and dead ends of the web-like maze: from spice shops to antiques to jewellery, there is something for everyone. Bartering is also part of the fun and you can find some real bargains if you look hard enough. There are a couple of places to escape to if you had enough of the labyrinth, such as Place Rahba Kedima – head up to the roof terrace of Place des Epices and enjoy an iced mint tea while overlooking the bustling square.

Location: Start from the Northern end of Djemaa el-Fna and work your way through the souqs, looking out for sights such as Museum of Marrakech and Ali Ben Youssef Medersa on your walk

Moroccan cuisine is an eclectic mix of traditional Berber fare and influences from Europe and the Middle East, which combine to give it its unique flavours. Try the tagine, cooked in a clay pot of the same name or the fluffy granules of steamed couscous or the delicious tagine kefta. Pick a stall at the Djemaa el-Fna and people watch as you tuck into freshly grilled meat kebabs or for a more authentic experience, hover towards a stall with the most locals in the heart of the souqs. Wash it all down with a glass or five of the ubiquitous sweet mint tea. If you have come to Morocco for the food, you will not be disappointed.

Location: Everywhere. Read my posts on the top foods in Morocco and the best places to try them!

First time visitors to Djemaa el-Fna can understandably feel a little intimidated. It launches an assault on your senses, especially at night as street performers dance to the sound of doumbek drums, Barbary monkeys on leashes pose for photos with tourists and the smell of fresh orange juice fills the air. However, the largest city square in Africa never disappoints, so pull up a pew at one of the food stalls and watch it come alive around you. Then climb to one of the café terraces on the edge of the square and watch the crowds wander around below as the sound of the music fills the air long into the night.

Location: Djemaa el-Fna is the heart of the Marrakech medina. You can’t miss it!

Take a break from wandering the alleyways of the medina and explore this 14th century college that features a grand courtyard with traditional mosaics and ornate arches, a marble mihrab (prayer niche) and a web of student living quarters on the second floor. Climb the stairs and peer out onto the courtyard through carved wooden windows and imagine the hundreds of students taking their lessons in the open air. Get here early morning or late afternoon to avoid the crowds of tourists.

Entrance: 50 dirhams but go for the combined ticket which includes entrance to Museum of Marrakech which is just 60 dirhams. 08:00-17:00 daily.

The remains of a once-opulent El Badi Palace are well worth the visit during your time in Marrakech. Built in the 16th century, the palace was once home to Sultan Ahmed el-Mansour but today’s residents include the storks that nest on top of the palace’s walls and a few cats. Climb up to the ramparts to get a great view of the grounds and don’t miss the impressive minbar (prayer pulpit) from the 12th century which used to be housed in the nearby Koutoubia Mosque. There is also a museum and various temporary exhibitions on site.

Location: From Place des Ferblantiers, go through an arch and turn right and follow the ramparts to the entrance.

Wander through the peaceful Bahia Palace

Originally built by a vizier (a high ranking Muslim official), the 19th century palace and gardens are a welcome escape from the hustle and bustle of the Marrakech medina. Wander through the beautifully decorated rooms, small interior gardens, courtyards complete with water features and check out its beautifully ornate doorways and windows.

Location: At the southern end of Rue Riad Zitoun el Jdid, just a minute’s walk from Place des Ferblantiers and near the Jewish quarter.

Koutoubia Mosque is the largest in the city, with its minaret towering over 70 metres above the Old City. Just a stone’s throw away from the Djemaa el-Fna, the mosque is an imposing sight and is one of the most famous attractions in the city. Take time to wander around its gardens and admire its 12th century architecture from all angles. The mosque was rebuilt after the initial building was found not be properly aligned with Mecca.

Admission: Non-muslims are not allowed inside the mosque but walking around its grounds is free.

Location: If you are around Djemaa el-Fna, you really can’t miss it. Look out for its minaret! 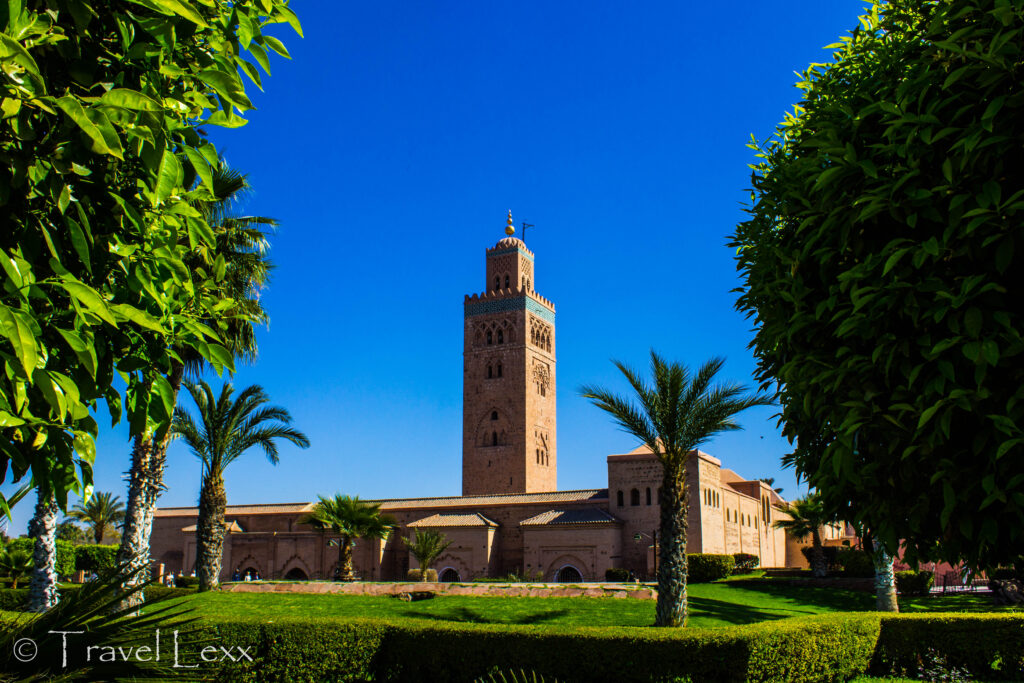 Stroll through the peaceful Jardin Majorelle

Outside the old city walls, hidden among one of the neighbourhoods of Ville Nouvelle (New Town) is a wonderful exotic garden, originally opened in 1947 but later acquired by famous fashion designer Yves Saint Laurent. Plants from all over the world from Mexican cacti to Japanese flowers grow side by side and visitors stride down spotless paths past bright yellow urns and across small brooks. There is also well-curated Berber Museum as well as a gallery, boutique and a café. Visit in the afternoon for the best photos.

Location: Rue Yves Saint Laurent. It takes about 45 minutes to walk from Djemaa el-Fna so grab a good map or take a taxi.