Read on for a detailed account of our sixth day on the Annapurna Circuit. Today, we trekked from Lower Pisang to Manang, covering a distance of 20 km in around 8.5 hours. One of the trek’s toughest days is also one of the most rewarding, with incredible views throughout.

Our sixth day walking the Annapurna Circuit was undoubtedly one of the toughest of the whole trek. It was one of our longest days in terms of distance and a tough climb early on is a challenge. Yet with some of the most stunning views of the entire trek, it’s also one of the most rewarding days on the circuit. Today’s route would take us from Lower Pisang to Ghyaru, from Ghyaru to Ngawal, from Ngawal to Braga and finally from Braga to Manang. Starting at 3200m, we would ascend to 3540m by the end of the day but going up as high as 3730m.  It’s around 20 km and 8.5 hours walk from Lower Pisang to Manang including all stops.

Read on for my experiences, tips and advice from day six hiking the Annapurna Circuit Trek.

Day Six: Lower Pisang to Manang on the Annapurna Circuit

There is an important decision to make at the start of this day of hiking. There are two available routes to Manang from Lower Pisang which differ significantly in difficulty. It’s possible to follow the road all the way to Manang – an easy and quick walk of around 3 to 4 hours. The longer, more challenging way is to follow the trekking route through Ghyaru and Ngawal which will take closer to 6-7 hours. I’ll be honest – the trekking route is one of the tougher days on the whole trek but it also offers hands down some of the most incredible views you’ll get on the Annapurna Circuit.

The trekking route also reaches the altitude of around 3700 metres so altitude sickness is a possibility. If you are feeling good and have no issues with fitness, I would definitely recommend the trekking route. In the worst case scenario, the next day is an acclimatisation day so you can get some rest in.

This itinerary is for the trekking route. If you do decide to go by road, it’s a very straightforward walk to Manang and you can’t get lost.

We set off early and crossed the river but instead of heading to Upper Pisang, turned left to hit the trail. The sun was shining and visibility was great which allowed us to get our first glimpse of the distinctive face of Annapurna II (7937m). Framed by lush green forests below, it was an incredible sight. Progress was definitely slow this morning due to the stunning scenery and countless photo opportunities!

We passed a beautiful mani wall with stone tablets (mani stones) inscribed with mantras – one of many encountered on the trail. You are always supposed to pass it on the left (clockwise) as, according to Buddhist beliefs, this is the way the universe spins.

This spot is perfect for a break, as the next section is a long, tough and steep climb to the village of Ghyaru. We did just that, taking in the scenery and getting ourselves ready for the next section. The switchbacks are hard work and the warm morning sun didn’t make it any easier. The reward for reaching Ghyaru is the absolutely magical panoramic views of the mountains in front of you. We took in the scene, snapped photos and chatted with fellow hikers. The village, understandably, is a popular spot for a break and there are a few guesthouses around where you can find food or use the bathroom. If the weather is good, it absolutely makes sense to linger here and just enjoy the atmosphere.

After leaving Ghyaru, the path climbs up towards a pass marking the highest point of the day but it’s a much steadier incline. It’s another great place to stop and take in the views. It’s hard to pick where to look – from Annapurna II and surrounding peaks in the distance to the sprawling valley below and forest-covered slopes, the scenery is spectacular. As this is one of the most picturesque days of the whole trek, there was a lot of stopping for photos. My advice would be not to rush today and just take it slow. This is also where altitude sickness can come into play, as it (probably) did with me, so there is even more incentive to not rush!

This is where I started to feel unwell. I am still unsure whether it was altitude sickness, dehydration or just a dodgy stomach but the new few hours weren’t fun. To make matters even worse, I noticed the bottom of my front day pack was wet and water was dripping onto the ground. Turns out I didn’t close my water bottle properly and its contents emptied into the bag. Which, of course, contained my DSLR camera which promptly died a watery death. RIP Canon EOS 600D – 19/04/2019.

The path headed gently down towards the village of Ngawal where I sent my companions ahead and stopped to use the bathroom. I just wanted this day to be over with so I could lie down and rest! Ngawal is also a good option for lunch as most people arrive here around midday so it can make sense to rest and relax. Our guide had other plans so we carried on but there is no shortage of places to stop for a break. 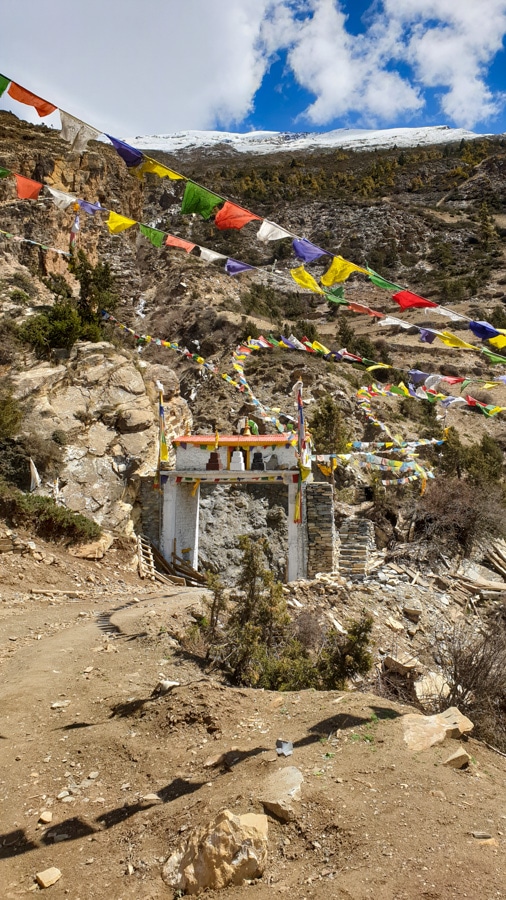 Time: Around 3.5 hrs (note, I was moving slowly due to feeling sick and we had an extra long break for lunch. This should take around 1.5-2 hours without any stops)

From Ngawal, there are a couple of route options. The blue and white marked trail drops down towards the town of Humde and the road. We continued on the red and white trekking trail which headed through a quarry and we had to sidestep a huge digger as we made our way down into the valley. The path now snaked down through a forest as we continued on towards Braga, the last village before Manang. Unfortunately I wasn’t concentrating on my surroundings too much as I was feeling sick so the next couple of hours were a a bit of a blur.

We stopped for lunch at a small cafe in the middle of the forest but I couldn’t even think about food. I sat outside and napped in the sun with my head in my hands. I was feeling sick but closing my eyes definitely helped. The only problem was that I didn’t apply any sunscreen to my ears which ended up getting pretty badly burnt. This ended up causing me quite a lot of pain over the next few days. Nothing was going right for me in the second half of the day!

Braga itself is small but there is a well-known monastery above the village as well as a beautiful stupa just to the side of the road. If you do the acclimatisation walk to the Ice Lake the following day, you will be back here so don’t feel like you have to stop today!

Some people choose to stop for the night in Braga but we continued on to Manang which is only about 2-3 kilometres away. That final push may seem tough at the end of a difficult day, but it’s worth it. Manang is one of the biggest towns on the trek and has some of the best facilities on this side of the pass. And coffee. Real coffee. It’s a straightforward final section to Manang walking on the road along the river. Horses grazed in the afternoon sunshine as we made quick progress before finally reaching our final stop, Tilicho Hotel.

Easily the best place we stayed on the entire circuit. Spacious and comfortable rooms, western toilets in some bathrooms, hot showers and cosy hang out spaces. The food is great (try the Yak Burger!) and there is a good selection of drinks at the bar. Now for the best part. Tilicho Hotel has an in-house bakery and coffee shop. That serves REAL, freshly-brewed coffee from a machine. The delicious cakes and pastries are some of the best I’ve tasted too. It’s all very affordable as well, considering I would have gladly paid double for everything. For the record, you don’t need to be staying at the hotel to enjoy the bakery/coffee. I actually think about that place all the time!