I enjoy cycling. Not enough to own a bike at home but enough to hire one or join a tour on most of my trips. When planning my trip to South Korea, I decided that I wanted to give cycling in Seoul a try. I thought it would be a great way to get my bearings and explore the city. So as soon as I dropped my bags at the hostel, I headed out for my first adventure. I decided to follow my guidebook’s advice and hire a bike to head on a self-guided tour of Yeouido and the Hangang River area. 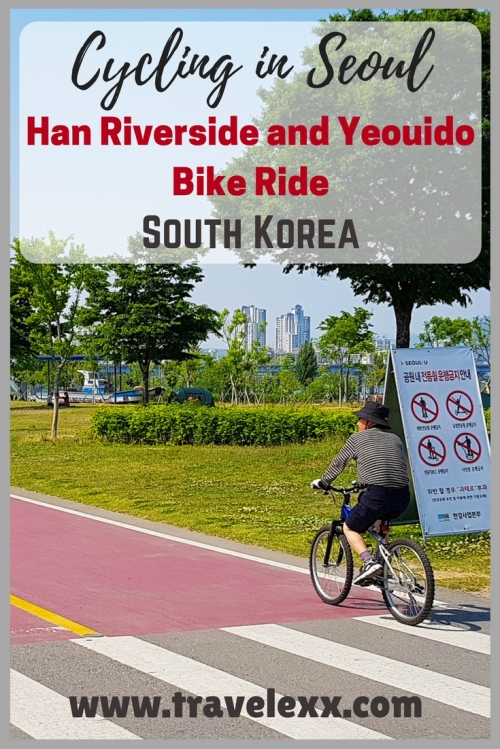 I jumped on the subway and made my way to Yeouido – a huge island that’s home to Seoul’s main financial district. Some of the city’s (and even South Korea’s) tallest skyscrapers are located on Yeouido but I wasn’t here for the buildings. I headed towards the river and the Yeouido Hangang Park – a sprawling green space along the banks of the Hangang River.

Yeouido Bike Rental – How to hire a bike in Hangang Park

I found the small bike rental hut after a few minutes strolling the park’s clean paths. There was a price list in Korean and English and I decided that two hours would be enough for me to complete the 15km route I planned to do. 5000 won (£3.50/$4.70) would get me a “single” classic bike while splashing out 10000 won (£6.70/$9.40) would land me an “advanced” bike which I soon figured out was a hybrid bike. I decided I was advanced enough to go for the latter.

After handing over my passport as a deposit (you can use any photo ID), I was handed my shiny bike and I was on my way! It was sunny and warm – I avoided the worst of the midday heat – as I set off to explore.

I cycled west through Hangang Park past strolling couples, friends relaxing in inflatable donuts and kids splashing around in the stream. I stopped to check out a sculpture of a monster from a famous Korean movie “The Host” that visitors are encouraged to climb. The nearby “I SEOUL U” sign – the capital’s official slogan – offered great views of the city skyline across the river. The park seemed like a great place to escape the hustle and bustle of the city. UPDATE: The I SEOUL U sign location has changed a number of times since March 2018. Let me know if you spot it somewhere different in the city!

I headed out of the park and up the ramp onto the busy Mapo Bridge. I cycled across and took the ramp down to the North bank of the Han River. There were a lot more cyclists on this side and a dedicated cycle lane that went along the river. Biking in Seoul appeared to be just as popular as it is in London!

I was surprised to notice an outdoor gym just a little further. As it turned out, Koreans love to keep active and this became a common sight throughout my visit! I couldn’t resist a mini workout and did a few sets of the bench press! I also got talking to some locals who came up to me and asked me questions about where I am from and what I was doing Korea. I’ve only been in the country a few hours and was already experiencing its incredible hospitality!

I continued my riverside bike ride, passing a gym every couple of minutes. If I stopped at every single one, I’d be packing some serious muscle by the end of the ride! There were also locals playing something resembling bowls and croquet but I couldn’t really figure out what they were doing! The views on this side of the river weren’t as good, as the path traced a busy carriageway but once in a while I caught a glimpse of Yeouido and its skyscrapers and greenery on the other side.

After a few kilometres I reached a cliff with a building adorned by a cross. This was the Jeoldusan Martyrs Shrine, where in 1866 up to 2000 Korean Catholics were executed and thrown into the Han River. Jeoldusan means “Beheading Hill” in Korean – I am glad I wasn’t visiting during the night as I can imagine it would be quite creepy.

It was time to cross the river back to the south side and after carrying the bike up the steps to Yanghwa Bridge, I cycled past the entrance to Seonyudo Park which occupies an island in the middle of the river. I didn’t have time to explore it but I’ve heard that it’s a great place to wander around or enjoy a drink at the café.

Art under the bridge

Once on the other side, I stopped to check another outdoor gym right under the bridge. Among the fitness equipment, pillars supporting the bridge each sported colourful music and film themed murals. I thought it was a really cool way to utilise what would otherwise be a drab space that you wouldn’t give a second glance.

I rode on down the tree-lined lane and soon made it back to the western tip of Yeouido. There was a fork in the road. Before continuing along the route, I took a detour to check out the Seoul Marina and the National Assembly building (heading down the right path in the photo). Back at the fork, I turned left and headed under the bridge you can see on the left side of the photo.

The route heads down the quieter southern part of Yeoudo island along the greenery of Yeouido Saetgang Ecological Park. It’s the first eco park of its kind in Korea and was designed to preserve the ecosystem of the area and educate visitors about flora and fauna in the area. I stopped a few times to wander along the boardwalks that take you closer to nature. I really enjoyed the peace and quiet of the area, even with the towering skyscrapers visible in the background.

After the relaxing stretch through the Eco Park, I reached the eastern end of Yeouido and started heading back towards Hangang Park and the start of my ride. This part of the island is notable for 63 SQUARE, a towering skyscraper and one of Korea’s tallest and most recognised buildings. There is an observatory deck offering impressive views of Seoul, restaurants and even an aquarium!

I was soon back in Hangang Park, cycling past ice cream stalls and restaurants set just offshore on a pier. Visitors could also hire swan boats to explore the river.

I managed to cover 15 km in my two allotted hours and still had a few minutes spare when I handed my bike over. I stretched my legs with a stroll through the park, enjoying the late afternoon sun and multiple iced coffees I bought to rehydrate! As first days go in a foreign country, this was a pretty good one! 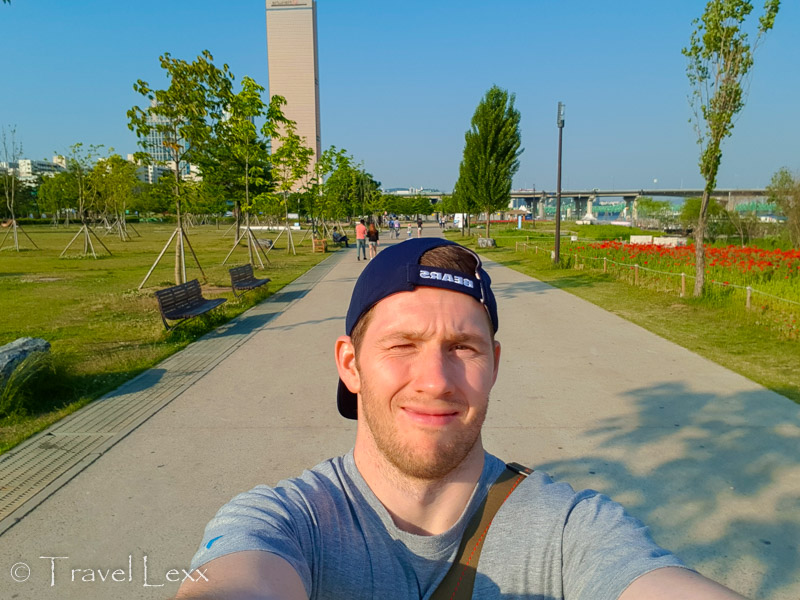 If you liked this post, check out my other blogs on South Korea!

Biking in Seoul – The Trip

What: A 15km cycling route around Yeouido island and along the Han River

Getting There: Subway Line 5 to Yeouinaru, take exit 3 and follow signs to Hangang Cruise Terminal in Yeouido Hangang Park.

Accommodation: I stayed at Zzzip Guesthouse in Hongdae which offers private rooms and dorms at good prices. The owners are fantastic and I highly recommend a stay! It’s about 15 minutes away from Yeouido Hangang Park by subway 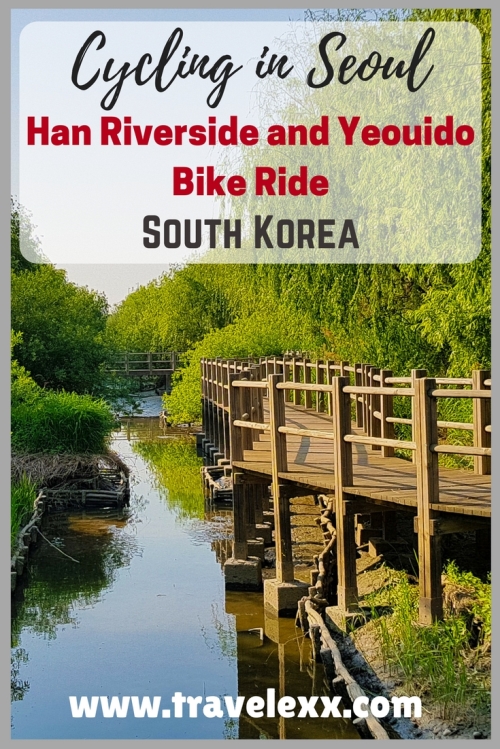