Here’s something a little different. Erik Bertrand Amme, who I trekked the entire length of the Annapurna Circuit with has kindly agreed to provide his honest account of one of the hardest days of our trek. Today saw us crossing Thorong-La Pass – at 5416m, one of the highest mountain passes in the world.

Crossing Thorong-La Pass, one of the highest navigable passes in the world, was one of my most memorable experiences ever. It was a long and gruelling ten days to get us to this point – of standing on top of the world, or at least of our world. My companions, who I shared this incredible journey with have been a key part of making it happen. We supported each other all the way, providing a physical and mental boost during the tough days of walking higher and higher into the mountains. The successes, the failures, the joys and the pain. We tackled it all together. So who best to share their experience of the day than one of the legends that I had the privilege of being with up on that mountain. Enjoy…

I am writing this many months after the actual experience. It is entirely possible that the feelings and emotions I describe are mixed with those that go through my mind at present. Nevertheless, when I think of those days, these are the things that come to mind. I am only describing what those experiences inspire in me today, and after all… isn´t today all that matters?

I could barely sleep the night before the final hike up to the top of Thorong La Pass. This was not the end of the journey, not by far, but it somehow felt like it should be the highlight of the experience. The day had finally come to reach the top, the reason why I had chosen this trek over others. It was a big deal. Going through a period of low self-esteem I needed to get out of my negative mind and prove to myself that I was able to do something somewhat out of my comfort zone. It´s funny how the mind works, it´s not like getting up there was in any way a big deal physically, but that didn´t make it less important. Thoughts of making it up there, of not making it, how it would be, how it would feel, how it should feel… kept me up at night.

And when I stood up in the morning, the conscious mind was shut down. Thoughts no longer mattered: I stood up and did what needed to be done to go up the mountain, and felt what had to be felt. When you have no choice and your primal instincts kick in, there is no space for thinking; all you can do is go. Fitness level, what you eat, 5400 metres altitude, success, failure; they all suddenly become irrelevant. Nature takes over.

Lexx was in full beast mode already, I didn´t expect less from him. My theory is that he has so much coffee accumulated in his bloodstream that he hits an immediate adrenaline peak seconds after waking up. I don´t remember what was up with our friend Martin, but he was probably saying something around the lines “Man, I can´t understand that you prefer going up rather than down, down is so easy. Up is just the worst, honestly.” – Martin couldn´t wait to start going down after days and days of consistent elevation gain along the trek… 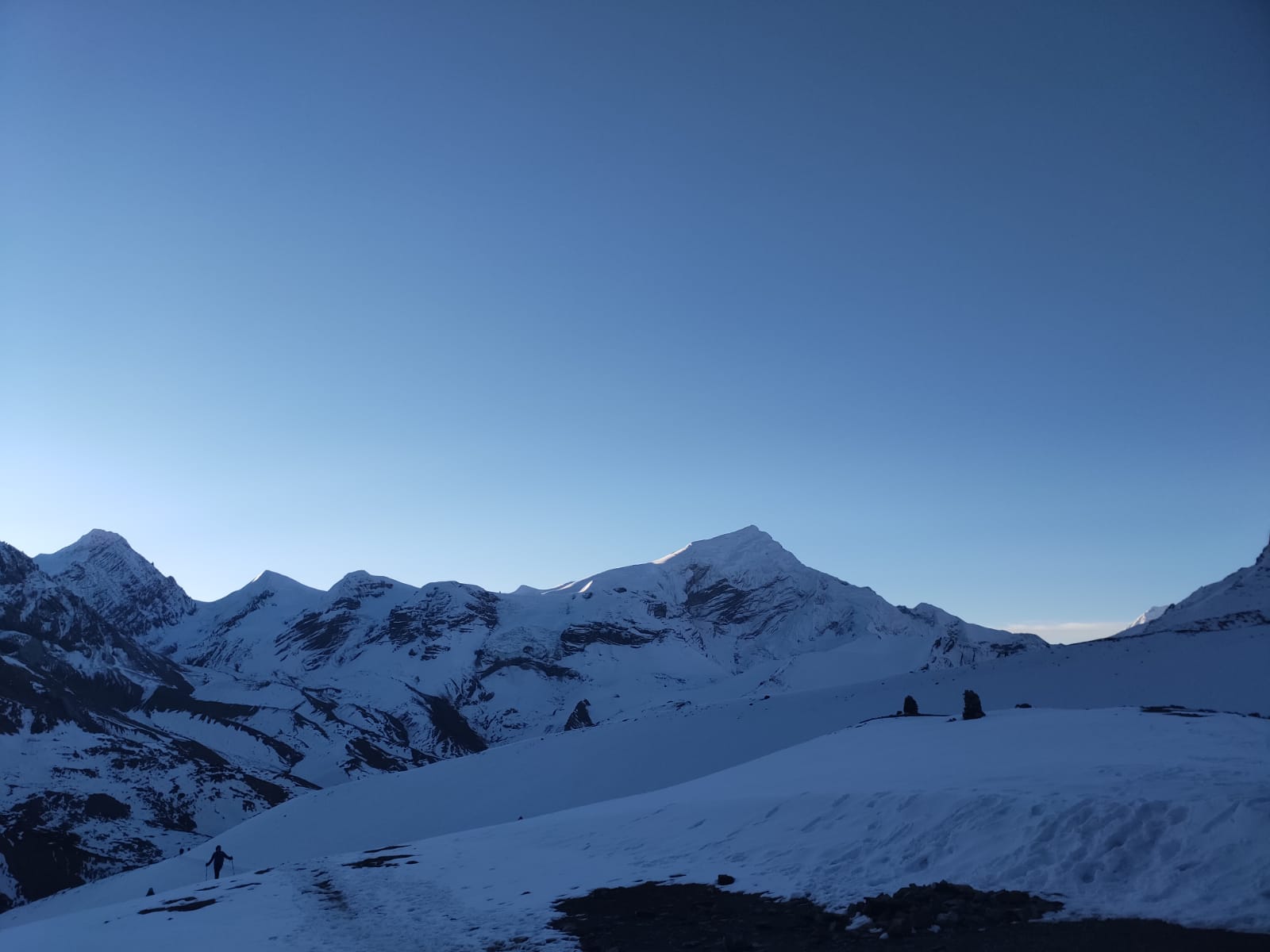 It was early in the morning, a few hours before sunrise. It was dark, incredibly cold and almost impossible to eat breakfast, my stomach was not in the mood. But we forced ourselves to eat something, as we needed the energy for the long day ahead. Details on what was for breakfast are irrelevant; a disgusting version of porridge was probably in the mix.

An intense, 500 metre elevation semi-climb in the dark to our first pit-stop, High Camp, was ahead of us. It was so cold; walking up the slope was the only way to stay warm, so up we went. Martin didn’t have a headlamp, not a surprise given that he arrived in Nepal in shorts and flip-flops, 2 days before starting the trek, after 48 hours of travelling without a single drop of water. I walked behind him, my lamp shining bright where Lex and our guide Dipak had stepped before us so we could follow. That the thin air would be a problem became immediately clear, and that was key. I couldn´t think about anything, all I felt is my breath, my chest rising up and down at a faster than usual pace; all I heard is the crunch of my boots in the snow. Breath – Crunch – Breath – Crunch.

Yet, it was perfect.

As we reached High Camp I was full of energy, I felt like I could climb anything at that point, which of course I couldn´t. We stopped to rest. The sun was not up but there was enough light to turn our lamps off. The dim lights of High Camp’s facilities were glowing in the dark, while hundreds of trekkers stood outside almost in silence, as if we didn’t want to wake up the mountains and the sun yet.

Up and Up from High Camp

Our short rest took just enough time for a group of at least 15 Indian trekkers to start their ascent to Thorong-La just ahead of us. We knew the Indians, since we had met them a week before in much, much more comfortable conditions. They were a nice group of people with beautiful spiritual and religious intentions; this was a pilgrim’s path after all, but they had the wrong mental and physical approach to the whole thing. Or so it seemed from where I stood. That they would struggle was a fact we knew from the first time we met them.

Being stuck behind them turned out to be one of the highlights of the day, and something we would remember forever. Only 10 minutes after leaving High Camp we reached a bottleneck. Steep wall of ice to the left, precipitous drop down to the right, and a single walkable lane ahead. The Indian group ahead forced us to stand motionless for far longer than comfortable. I was freezing under my 5 layers of clothes and I couldn’t feel the tips of my fingers anymore.

The best thing is, it was still perfect.

When the single lane opened up slightly our instincts told us to run. Our instinct or the fact that we saw Lexx doing exactly that a few moments before us. I could barely breathe, my lungs were burning, and I still don´t know where the energy came from. But I just could, because my body knew best, and I trusted that it was far wiser than my head (because let´s face it, it really is). I should listen to my body more often, lesson learned.

I forgot the cold, I forgot the lack of oxygen, and I enjoyed. Stopping every few metres at every pole of prayer flags along the way to catch my breath, in turn allowed me to take in some of the most beautiful scenery of the journey. I observed the people, their slow and steady steps, their gear and what it said about them (I´m an expert people-watcher); the footprints of a snow leopard, the colours of the prayer flags, the freezing temperature of the poles that held them.

And yes, of course, everything was still perfect.

It took me approximately 4 hours of walking and stopping to reach the top of the pass. The last 200 metres seemed impossible in my head; luckily it was not my head doing the walking. At that point we had gained over 5000 metres altitude in the last few days but those last ones were inexplicably hard. Every little slope gave me the hope that it would be the last one, only to find out that there was another hill waiting behind it. And then I saw the most ridiculous agglomeration of flags. That had to be it! A worn down sign read:

CONGRATULATION FOR THE SUCCESS

Success… there were as many definitions of success as people up there.

There is a picture of the four of us, Lexx, Martin, Dipak and me with that sign that perfectly depicts the situation. While we are incredibly proud of ourselves, Dipak looks like he just came back from a nice and gentle walk around the park, unaffected. Lexx is drinking tea because he´s British and that´s what Brits do. Martin is openly thinking: “I can finally walk downhill”. I seem to have no idea where I am, but I did know this:

I was full of beautiful energy inside me. Thankful and blessed, I felt the utmost power of love. 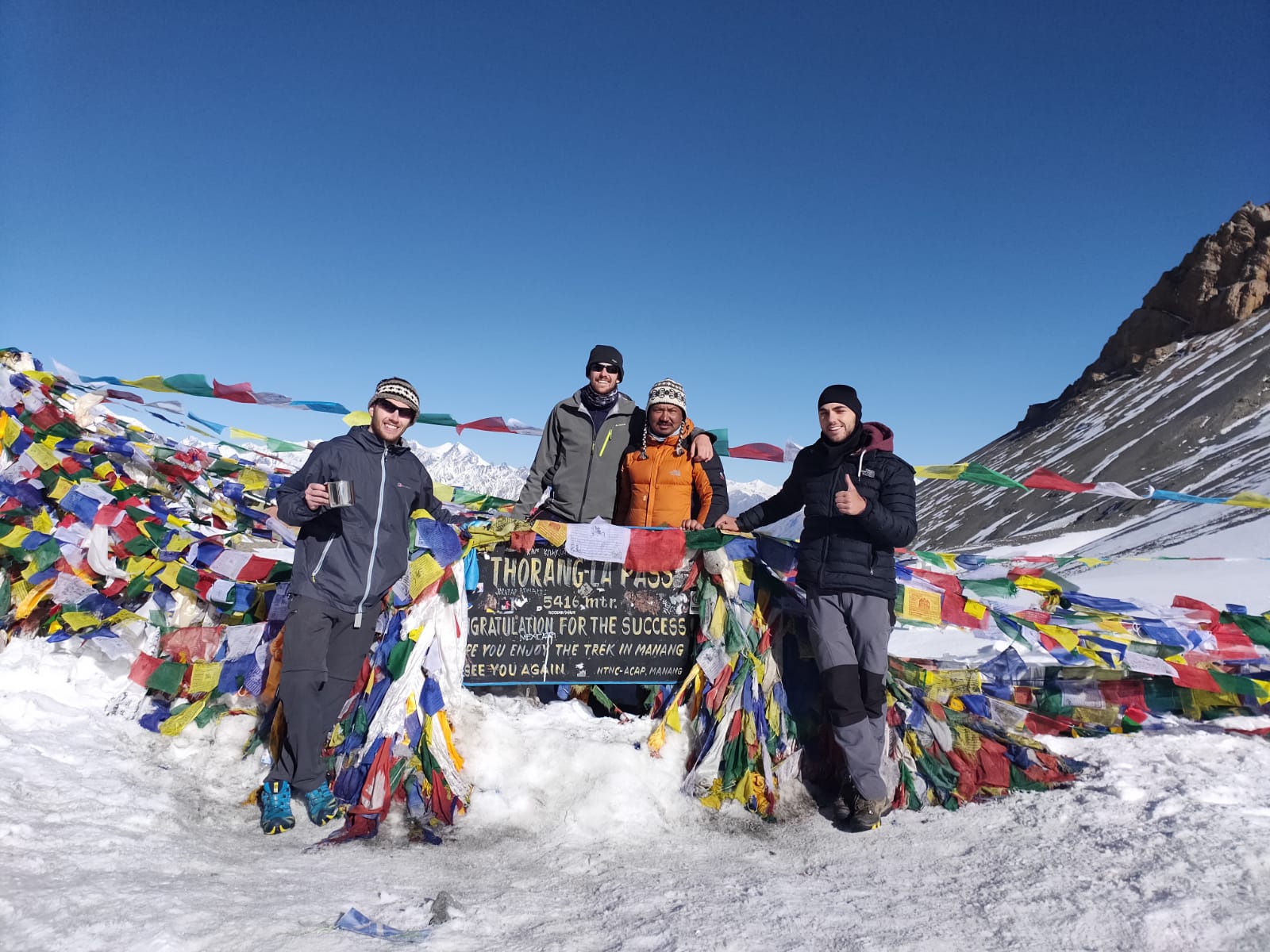 Liberation From The Mind

But I will try to describe it as well as I can:

This is just a short story of my experience with the liberation from the mind. I found that it is only when my mind, body and spirit work in sync together that life opens up before me, and my mind gets in the way a lot.

For someone who’s been a rational thinker all his life, this lesson was important to learn. That day I would feel the cold, feel the sound of my boots in the snow, feel the achievement, feel the hot tea burning my otherwise cold throat at the top of the pass, feel the love for life… but I would not think about all the things that had been crossing my mind in the previous sleepless night. I felt in perfect harmony with nature, which is where I belong as a human. 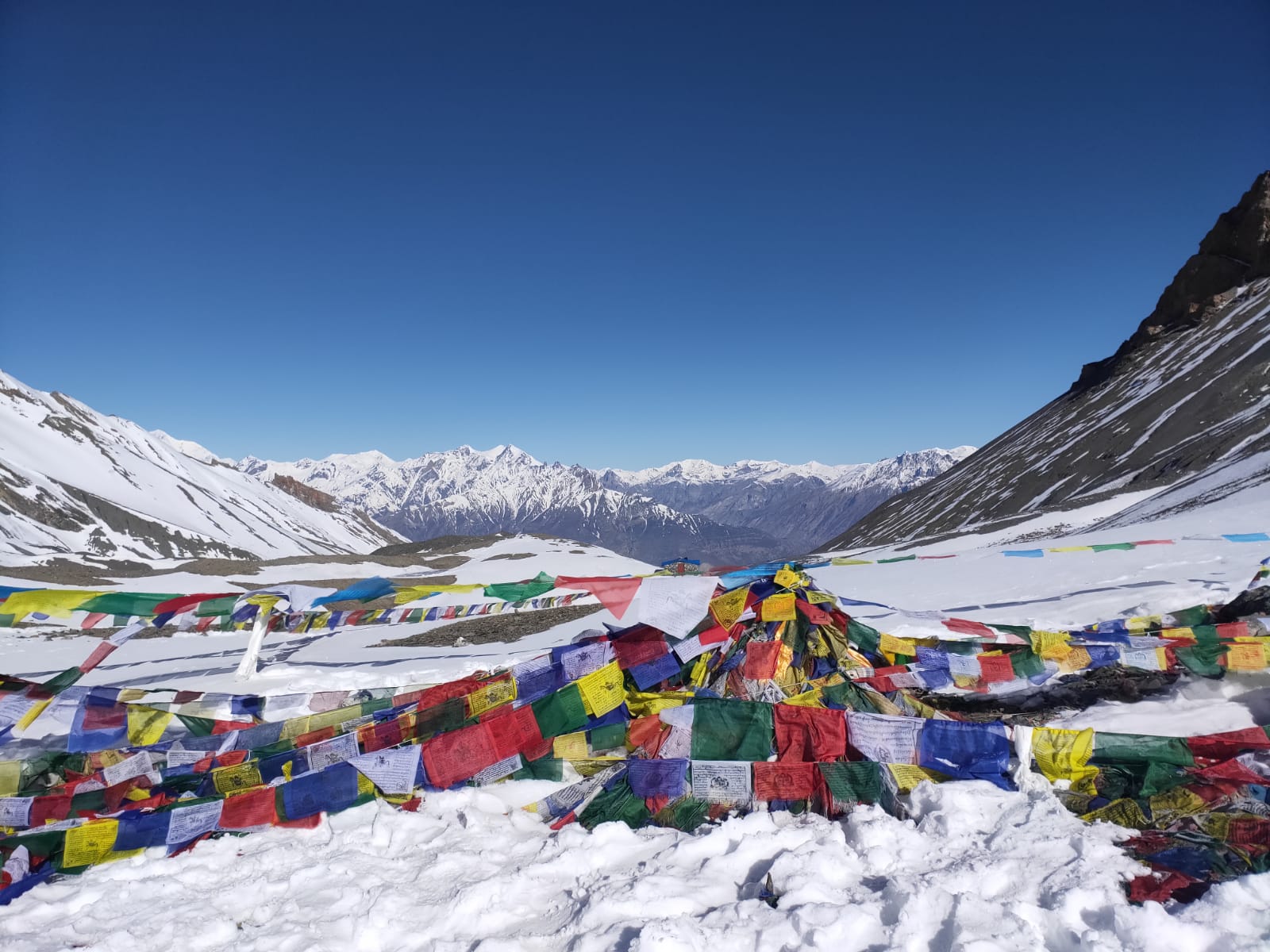 As a child brought up surrounded by nature who then abandoned it for his entire adult life, I re-learned that it is that inexplicable and powerful energy that materialises within me when I´m in close contact with nature that allows me to feel life beyond my mind’s limitations.

It was important for me to understand these limitations in order to experience reality unbiased. This encounter with nature allowed my mind and body to connect better together. Nepal proved to be the optimal scenario to add the final key element to the mix: spirituality.

Then and there, for a brief moment, high up in the heart of the Himalayas, my mind, my body and my spirit, which I had always observed as separated from one another, became one with everything.

What does nature inspire in you? 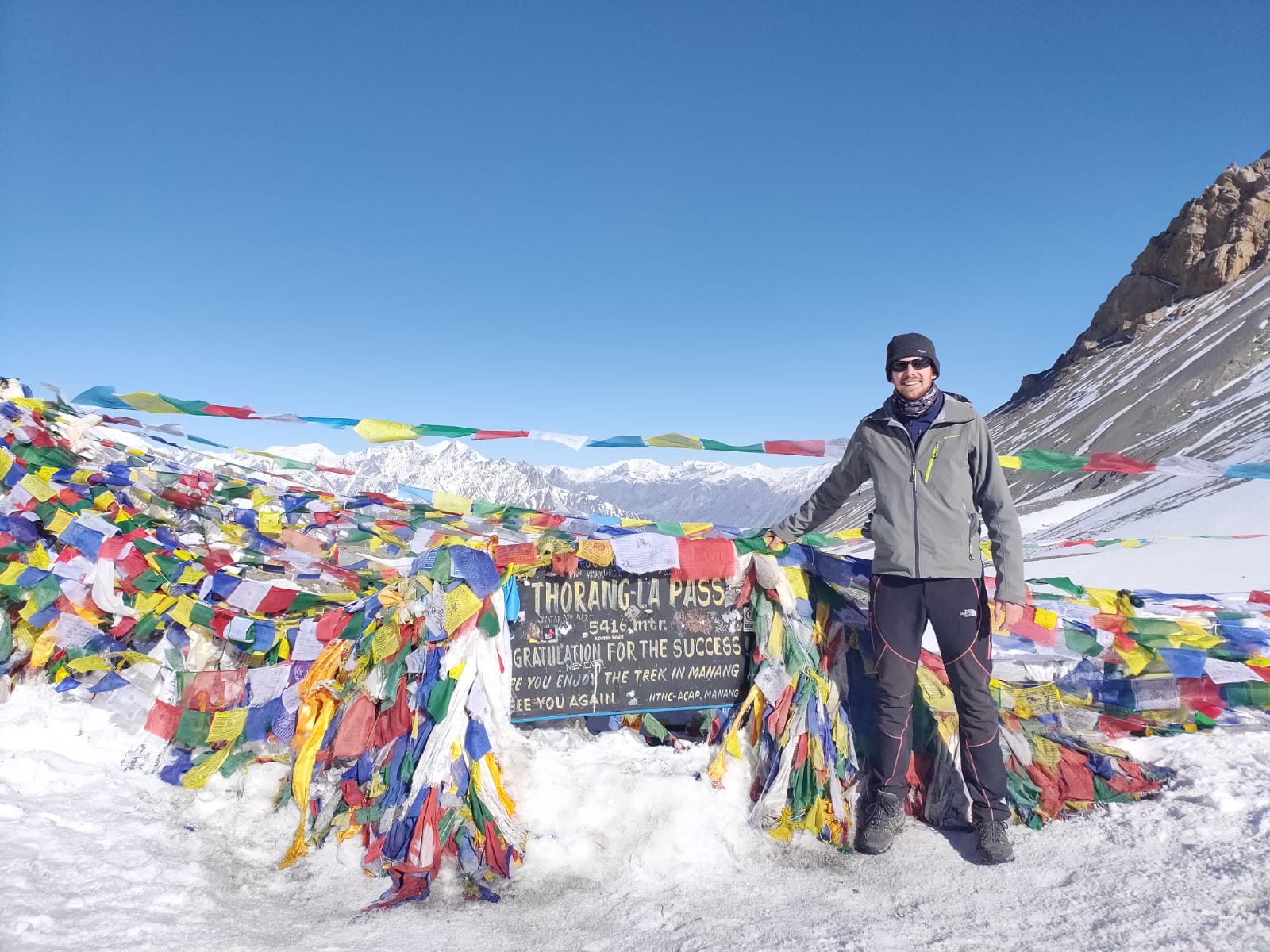