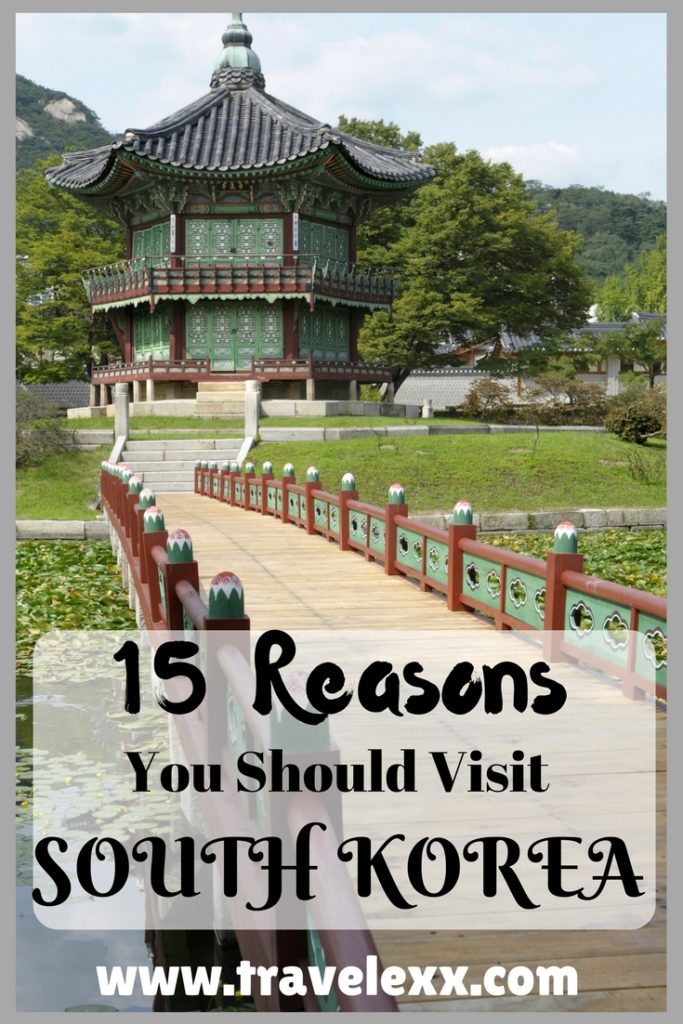 South Korea may be overlooked by many visitors to Asia, but there are so many reasons why you shouldn’t make the same mistake. While it’s hardly undiscovered, its mix of stunning landscapes, rich history and fascinating culture deserves a lot more attention than it gets. So go before it becomes the hottest new destination – and with the Winter Olympic Games taking place here in 2018, it might not take long! Here are 15 reasons to visit South Korea!

I could (and most probably will) do a whole post on Seoul alone – there is just SO much to see and do. From royal palaces of Gyeongbokgung and Changdeokgung which trace some of the history of the Joseon Dynasty to leafy Namsan Park and hip nightlife and culinary hubs of Hongdae and Itaewon, Seoul will keep you on your toes (luckily it’s a very walkable city). Aside from being the gateway to the rest of the country, Seoul is one of the coolest capital cities I’ve been to and – cliché alert – has something for everyone.

Step back in time in Korea’s biggest cities

While Seoul and Busan might at first seem like sprawling metropolises, driving into the future with their modern skyscrapers and cutting-edge technology, they also haven’t forgotten their history. Bukchon Hanok Village in the former offers a glimpse into the past with traditional houses, a cultural centre and a myriad of narrow alleyways full of arts and crafts shops, cafes and galleries. Getting lost here is part of the experience and a great way to discover hidden gems. It’s a more vibrant experience in Busan’s Gamcheon Culture Village – a former slum that received a makeover a few years when residents and students turned it into a colourful neighbourhood full of artworks, shops and cafes.

If you have travelled pretty much anywhere in Asia, you have probably come to expect religious buildings at almost every turn. Korea is no exception and there are plenty of beautiful shrines and temples all around the country. The colourful Jogyesa Temple is one of the most important in Korea and is located in central Seoul. Nearby Jongmyo Shrine is UNESCO-listed and is worth exploring. A visit to Beomeosa in Busan, which is set at the edge of a sacred mountain, can be combined with great hikes while the Guinsa complex in Danyang is one of the most beautiful I have seen in Asia. Bulguksa in Gyeongju is another must-visit site and contains no less than seven Korean National Treasures!

Korea’s natural beauty catches most visitors unawares. Many associate Korea with high-rise cities, the DMZ and Kimchi but it’s the country’s stunning scenery that steals the show. Its mountains, while moderate in size, offer great hiking and views from its summits. Jeju Island, Korea’s largest, is packed with waterfalls, mountains and volcanic formations. If beaches are more your thing, there is a range of options – from secluded, like Jinha Beach to A-Listers like Haeundae in Busan. You don’t even need to go far out of the major cities to experience nature – as Bukhansan National Park (more on it below) proves.

One of the more unique things to experience on your visit is, undoubtedly, the Demilitarized Zone (DMZ) between South and North Koreas. Established in 1953, the 250km strip divides the Korean peninsula roughly in half and is a result of an armistice agreement between the two countries. The truce between the nations is still uneasy, to say the least, and a visit to the DMZ is fascinating. Visitors have to join official tours and there are a number of access points across the length of the zone. One of the most popular sections is at Panmunjom, which is easily reached from Seoul and offers a chance to visit the Joint Security Area (JSA) where the treaty was signed and which remains as the only place the two countries can engage face to face.

Seoul is also a great example of a city taking urban regeneration seriously. Through various restoration projects, it is transforming into one of the greenest cities in the world. The 11km Cheonggyecheon Stream, obscured by an overpass since the 1950s, received a facelift in 2005 turning into a public walkway with art, sculptures and ornate bridges throughout its length. It’s an absolute must-do on any Seoul itinerary! Elsewhere, hire a bike at Yeouido Hangang Park and explore the leafy island on two wheels, passing through its Ecological Park, the first of its kind in Korea. And brand new for 2017, Seoullo 7017 is the city’s equivalent of the New York’s High Line – a raised green walkway/public space that replaced an old overpass right by Seoul Station.  Elsewhere in Korea, there are plenty of ongoing projects such as reintroduction of Asian Black Bears into Jirisan National Park.

Eat all the incredible food

I can pretty much just stop there. There isn’t really much else to say. Food. In. Korea. Is. Amazing. It’s delicious, cheap and…amazing.

Hike your way around

I’ve already talked a lot about hiking in Korea on this blog and for good reason! Korea is PERFECT for hiking and is practically a national pastime. It’s not uncommon to see whole families (grandmas and grandpas leading the way) charging up the mountain in a quest to conquer another peak. With well-signposted paths, trails for all abilities and stunning scenery, there is no better place to do your first or one hundredth hike.

Visit a national park on a stopover

I get that hiking isn’t for everyone. It involves an element of preparation and tends to require travel which isn’t great if you are on a tight timescale. Not in Seoul though – Bukhansan National Park is practically in the city itself (ok, only a subway and bus ride away) and has great hiking, stunning temples and incredible scenery. Oh, and don’t worry if you haven’t got any suitable gear – you can buy everything you need for a hike in one of the many outdoor brand stores just outside the park’s entrance. It’s completely feasible to touch down in Seoul in the morning, hike up the 836m Baegundae Peak and catch another flight in the evening. Oh and it has a Guinness World Record, too.

Shop your way around Korea’s markets

One of the more interesting ways to get a taste for local life in Korea is to visit some of the many markets around the country. Namdaemun Market in Seoul is the oldest and largest in the country and you can find various goods in its many sections. Do what I did and duck in and out of the market’s many maze of alleyways, trying delicious street food and people watching. Elsewhere in Seoul, Gwangjang Market is THE place to find authentic Korean street food in a couple of covered alleyways. Pop yourself down at one of the many stalls and enjoy the incredible atmosphere and mouthwatering food alongside locals. Elsewhere in Korea, Sokcho’s market is the place to try fresh fried chicken while Jagalchi in Busan is the country’s biggest seafood market. Yakjeon-golmok Market in Daegu is famous for its medicines and herbs.

Go off the beaten path

Some of the coolest travel experiences I’ve had were in places that were away from tourist hotspots and slightly off-the-beaten-path. While Danyang isn’t exactly a remote wilderness – it’s a resort town – it sees very few foreign visitors. However, my visit turned into one of my the favourite parts of my trip. Guinsa Temple is an incredible temple and a headquarters of the Cheontae Order of Korean Buddhism. It’s one of the few places that offers temple stays in Korea which are highly encouraged. Nearby Sobaeksan National Park has a multitude of hiking trails and offers great views from Birobong Peak. On the way to the national park, and only a short walk from Danyang itself, is the otherworldly Gosu Cave – a 450 million year old limestone cave. It boasts incredible formations, including stalagmites and stalactites, in its depths and a series of walkways and stairways lead visitors on a self-guided tour.

The incredible stalactites and stalagmites are a highlight of a visit to the atmospheric Gosu Cave near Danyang, Korea. The limestone cave has been designated as a national monument and is 1,300 metres deep. It can be explored via a series of stairs and walkways, bringing you close to this natural wonder

Get swept up by the baseball fever

Koreans are pretty fanatical when it comes to sport – and especially baseball. The Korean Baseball Organisation (KBO) is the country’s version of Major League Baseball and while the standard isn’t quite as high, the matches are still of a good quality with plenty of action. However, I would recommend anyone to visit for the atmosphere – because you haven’t seen ANYTHING like this. Fans chant, dance and cheer their way throughout with every player having their own song. Cheerleaders get the crowd going and just being in the stadium is a pretty special experience. Add to that cheap beer and gameday staples like fried chicken and hotdogs and you have a fantastic day out!

Korea’s culture is fascinating on so many levels. One of them is the fact that many places stay open 24 hours! Koreans are obsessed with coffee and many cafes are open around the clock, even on weekends! Convenience stores are open 24/7, even in smaller towns and some restaurants serve hot food at any time of day and night too! Seoul is obviously where this is particularly noticeable – it’s the capital after all! However, despite this incredible perk – if you are a night owl, you will do GREAT in Korea – public transport stops running around midnight. I still struggle to understand this – it’s kinda the reverse of London.

I’ve already talked about Korea’s great public transport network here – it’s comprehensive, reliable and is not expensive to use! The train network is not as wide-reaching as Japan’s but is very good for long-distance journeys (like Seoul to Busan for example). The Korail website has information on schedules and fares as well as rail passes – these are not as essential as Japan’s. Buses are comfortable, air-conditioned and operate routes to even remote parts of the country – plus are very cheap! See my Korea Travel Tips for a more comprehensive look at travelling around Korea.

Korea is really a year-round destination. I travelled in May, which is considered to be the best time to visit with long, sunny days and warm temperatures across the country. This time of year is ideal for hiking and outdoor activities. Summers can get really hot and humid so it’s a perfect opportunity to escape to those beaches! And while it can get pretty cold in the winter, Korean mountains become a perfect place to take to the slopes. Korea has some world-class skiing resorts and Pyeongchang will even host the 2018 Winter Olympic Games!

Do you need any more convincing? Let me know why you want to travel to Korea!

29 thoughts on “15 Reasons You Should Visit South Korea”